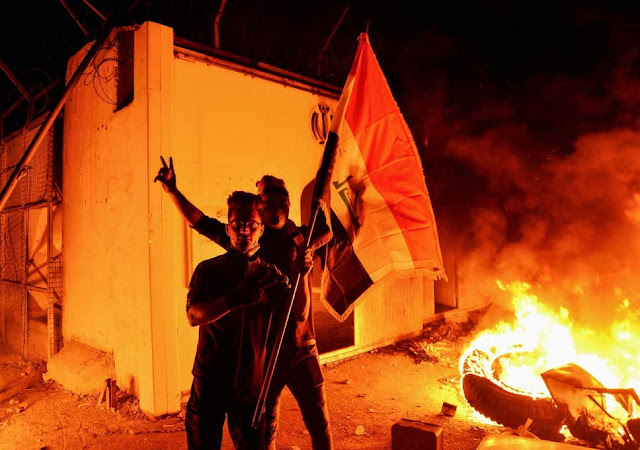 Iraq, a day of blood follows arson attack on Iranian consulate: at least 45 dead
About 29 dead in Nassiriya, four victims in Baghdad and 12 in Najaf, a Shiite holy city. In Nassiriya thousands of people defy the curfew to pay homage to the dead. Paramilitary forces ready to thwart attacks on Shiite religious offices. The protesters intend to continue in the struggle.


Baghdad (AsiaNews / Agencies) – The latest toll from the violent repression carried out yesterday throughout the country by the police and security forces, in response to the assault of the Iranian consulate in Najaf set on fire by protesters is now 45 dead.

In Najaf clashes there were 12 victims added to the 29 dead - dozens injured - in the southern port city of Nassiriya, where troops opened fire on demonstrators who had blocked two strategic bridges. Four deaths in Baghdad.

In Iraq, the escalation of violence linked to anti-government demonstrations has not stopped, which since October 1st have been shaking the country and are being repressed with increasing force by police and security departments.

In Nassiriya thousands of people, challenging the curfew, took to the streets to pay tribute to the victims of the violence of these last hours. According to analysts and experts the turning point of the crisis could be the assault on the diplomatic representation of Tehran, a power that supports the current government accused by the population of corruption and incapacity, with images of the consulate in flames and ruined.

Overnight Tehran closed the border point of Mehran. Meanwhile, the commander of the People's Mobilization Forces (Pmf), an Iraqi paramilitary group close to Iran, says that the violence in Najaf is an attempt to attack the Shiite clergy who live in the city. The militias are ready to use force against anyone who intends to threaten the highest local position, the great ayatollah Ali a-Sistani, and the other prominent religious. "We will cut off the hands of anyone who tries to get close to al-Sistani," threatened Abu Mahdi al-Muhandis.

In these hours the populist leader Moqtada al-Sadr has also intervened, asking for the executive to resign en bloc. He was also highly critical of those who set fire to the Iranian consulate, who risk provoking a harsh repression of the authorities. However, Najaf protesters are resolute: for Ali, one of those who participated in the protest, the fire is a "courageous gesture and a reaction of the Iraqi people. We don't want the Iranians ". "There will be revenge - he adds - from Iran, I'm sure. They are here and the security forces are ready to shoot us".
FULL TEXT Source: AsiaNewsIT
Posted by Jesus Caritas Est at 8:19 AM