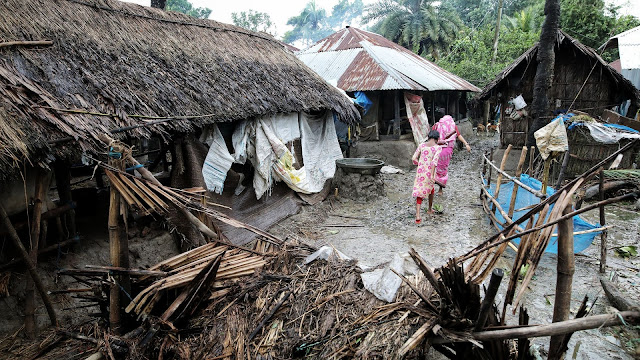 Cyclone Bulbul hits Bangladesh and India, killing more than 20 people and displacing two million
The storm moved at 125 km per hour, later dropping to 80-90 kilometres. In Barisal, 158 millimetres of rain fell in six hours, flooding the bishop's residence. The port in Chittagong has reopened. Caritas is considering providing aid.

Dhaka (AsiaNews) – Cyclone Bulbul hit coastal Bangladesh (Khulna and Chittagong) and India (West Bengal) over the week-end, killing more than 20 dead, 14 in Bangladesh alone. Some 5,000 homes were destroyed and two million people forced to spend the night in tents.

The storm reached 125 km per hour, sweeping away everything on its path. Trees were uprooted and streets and buildings were flooded. In Bangladesh some people died from collapsed roofs, uprooted trees and power outages.

The port in Chittagong reopened after operations were suspended because of weather conditions.

According to the minister, damage in the Sunbarbans, a mangrove area in the delta formed by the confluence of Ganges, Brahmaputra and Meghna Rivers in the Bay of Bengal, would have been much worse if the authorities had not taken precautions ahead of the storm.

One of the most affected areas is the Diocese of Barisal, which yesterday received 158 millimetres of rain in six hours. The bishop's residence was flooded.

Caritas Bangladesh is evaluating the situation and will decide whether to start distributing first aid equipment.