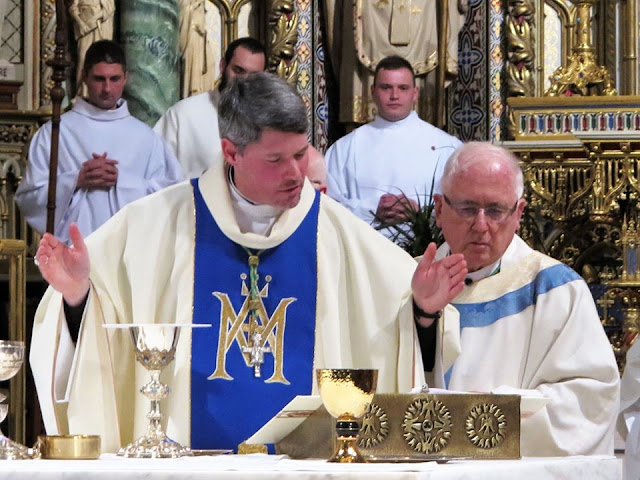 A beautiful celebration honoring Bishop Christian Riesbeck, CC was held at Notre Dame Cathedral in Ottawa, Ontario, Canada on November 21, 2019. Riesbeck, is a Companion of the Cross and auxiliary bishop of Ottawa since 2014. He will be installed as bishop of St. John, New Brunswick in December. Bishop Christian gave an inspirational bilingual homily (see video below) and focused on the Blessed Virgin Mary; as the event was held on the memorial of the Presentation. He explained what a great influence Mother Mary has had on his vocation.
A week earlier his childhood parish St. Albertus, a German language church (in Ottawa), held a double celebration honoring his father, Heribert Riesbeck's 80th birthday and Bishop Christian's departure (pic below). Mr. Riesbeck is from Bavaria, Germany and is one of the founding members of the St. Albertus, parish and he is an active member of the pastoral council and Männerverein. His sister traveled from Bavaria to come to the celebration.
Mr. Riesbeck is an avid photographer and has often taken photos for the Archdiocese of Ottawa. He and his wife Colette have two other married daughters Heidi, Sylvia and 3 grandchildren. Mrs. Colette Riesbeck is originally from New Brunswick; where Bishop Christian is going to be installed. Mr. Riesbeck spoke at the celebration saying to his son, Bishop Christian, "I'm so proud of you!". The family was also present at the Cathedral.

Born in Montreal in 1970, Christian Riesbeck grew up in the Ottawa region. He has earned a Bachelor of Social Sciences degree in political science from the University of Ottawa, a Master of Divinity degree from St. Augustine’s Seminary in Toronto and a Master’s degree and Licentiate in Canon Law from St. Paul’s University in Ottawa. He was ordained to the priesthood by Archbishop Marcel Gervais at Notre Dame Cathedral on October 12, 1996 and performed pastoral ministry at several parishes in Ontario, Canada and in Houston, Texas. Bishop Riesbeck has served as Assistant General Superior of the Companions of the Cross, as Chancellor at the Archdiocese of Ottawa and as Episcopal Vicar for Canonical Concerns. He was appointed Auxiliary Bishop of the Archdiocese of Ottawa and ordained Bishop on March 19, 2014. Following his episcopal ordination, he has served as Vicar General and Vicar for National Language Parishes, Communities and Faithful for the Archdiocese. As a member of the Canadian Conference of Catholic Bishops (CCCB), Bishop Riesbeck served as a Consultor to the Standing Committee for Canon Law, co-Chair of the CCCB Catholic-Evangelical dialogue, and since 2017 is the Moderator of the Canadian Appeal Tribunal. The Diocese of Saint John has 58 parishes serving a population of over 115,000 Catholics.
Video- pictures from Cathedral taken by Paul Lauzon - Image from St. Albertus and written by Miriam Westen
Posted by Jesus Caritas Est at 3:54 PM