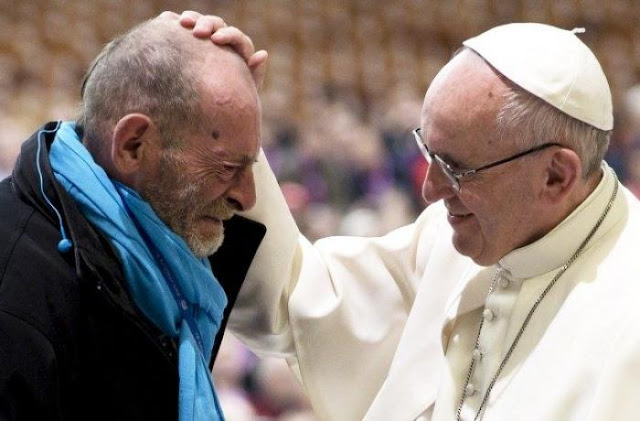 Friday of Mercy: Pope blesses ‘Palace’ for the Poor
Pope Francis inaugurates the new Night and Day Care Center for homeless people near St. Peter’s Square, as part of his Friday of Mercy initiative.
By Devin Watkins

A Palace for the Poor: That’s what Pope Francis blessed on Friday afternoon, just ahead of the World Day of the Poor.

The 4-storey Vatican property sits in a prestigious location right off the colonnade of St. Peter’s Square. It still carries the name of the Roman family that built it in the 1800s: Palazzo Migliori – “Palace of the Best”.

Acquired by the Vatican in the 1930s, the building was recently vacated by a congregation of religious sisters.

Pope Francis personally directed his Almoner, Cardinal Konrad Krajewski, to turn it into a place where the homeless and poor of Rome can sleep, eat, and learn.

The charitable operation is staffed and run by the Sant’Egidio Community.

Space for all
In a communique, Cardinal Krajewski described how the palace is to be used.

The upper two floors are dormitories where around 50 men and women can sleep, though it is able host more when Roman temperatures plummet and the need is greater.

Those guests are offered breakfast and supper in the refectory on the 2nd floor.

Volunteers will also be able to use the kitchen to prepare hot meals to be distributed in the evenings to the homeless who find shelter at one of Rome’s train stations.

During the day, the bottom two floors provide space for volunteers to teach those in need to use the computer. There is also space for reading, recreation, and psychological counseling.

The construction company that renovated the “Palace of the Best” employed a group of homeless people – at the Vatican’s urging.

The company was so impressed by their work ethic that it hired them!
FULL TEXT Source: VaticanNews.va