At Mass, Pope Francis Prays for Artists and says "Each of us has one's own..moment in which Jesus approached us and said: "Follow me" Full Text 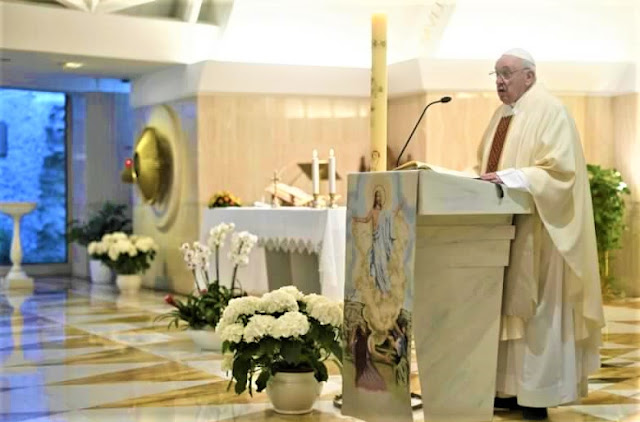 Introduction
We pray today for the artists, who have this very great capacity for creativity and through the path of beauty they show us the way forward. May the Lord give us all the grace of creativity right now.
Homily
People who had listened to Jesus throughout the day, and then had this grace of multiplying the loaves and had seen the power of Jesus, wanted to make him king. They first went to Jesus to hear the word and also to ask for the healing of the sick. They stayed the whole day listening to Jesus without getting bored, without getting tired: they were there, happy. Then when they saw that Jesus was feeding them, which they did not expect, they thought: "But this would be a good ruler for us and surely he will be able to free us from the power of the Romans and bring the country forward". And they got excited about making him king. Their intention has changed, because they have seen and thought: "Well ... because a person who does this miracle, who feeds the people, can be a good ruler" (cf. Jn6.1 to 15). But at that moment they had forgotten the enthusiasm that the word of Jesus gave birth to in their hearts.
Jesus went away and went to pray (cf. v. 15). Those people stayed there and the next day they were looking for Jesus, "because he has to be here" they said, because they had seen that he had not got on the boat with the others. And there was a boat there, it remained there ... (cf. Jn 6 : 22-24). But they did not know that Jesus had reached the others by walking on the waters (cf. vv. 16-21). So they decided to go to the other side of the sea of ​​Tiberias to look for Jesus and, when they saw him, the first word they say to him is: "Rabbi, when did you come here?" (v. 25), as if saying: "We don't understand, this seems a strange thing."


And Jesus brings them back to the first feeling, to what they had before the multiplication of the loaves, when they listened to the word of God: «Verily, verily I say to you, you are looking for me not because you have seen signs - as at the beginning , the signs of the word, which excited them, the signs of healing - not because you saw signs, but because you ate of those loaves and were satisfied "(v. 26). Jesus reveals their intention and says: "But it is so, you have changed your attitude". And they, instead of justifying themselves: "No, Lord, no ...", they were humble. Jesus continues: «Work hard not for the food that does not last, but for the food that remains for eternal life and that the Son of man will give you. Because upon him the Father, God, has placed his seal "( Jn6.27). And they, good ones, said: "What must we do to do the works of God?" (v. 28). "Believe in the Son of God" (cf. v. 29). This is a case in which Jesus corrects the attitude of people, of the crowd, because in the middle of the journey she had moved away from the first moment, from the first spiritual consolation and had taken a path that was not right, a more mundane path than evangelical.
This makes us think that many times in life we ​​start a road to follow Jesus, behind Jesus, with the values ​​of the Gospel, and halfway there is another idea, we see some signs and we move away and we conform with something more temporal, more material, more worldly - it may be - and we lose the memory of that first enthusiasm we had when we heard Jesus speak. The Lord always returns to the first meeting, to the first moment in which he looked at us, spoke to us and it gave birth to the desire to follow him. This is a grace to ask the Lord, because in life we ​​will always have this temptation to move away because we see another thing: "But that will be fine, but that idea is good ...". We walk away. The grace to always return to the first call, at the first moment: don't forget, do not forget my story, when Jesus looked at me with love and said to me: "This is your way"; when Jesus through so many people made me understand what was the way of the Gospel and not other ways a little worldly, with other values. Go back to the first meeting.
It always struck me that - among the things that Jesus says on the morning of the Resurrection - he says: "Go to my disciples and tell them to go to Galilee, they will find me there" (cf. Mt 28.10), Galilee was the first place meeting. There they had met Jesus. Each of us has one's own "Galilee" inside, one's own moment in which Jesus approached us and said: "Follow me". In life what happens to these people happens - good, because then they say to him: "What should we do?", They immediately obeyed - it happens that we move away and look for other values, other hermeneutics, other things, and we lose the freshness of the first call. The author of the letter to the Hebrews also refers us to this: "Remember the first days" (cf. Heb10,32). The memory, the memory of the first meeting, the memory of "my Galilee", when the Lord looked at me with love and said: "Follow me".
Prayer for spiritual communion
People who cannot communicate now make spiritual communion:
My Jesus, I believe you are in the Blessed Sacrament.
I love you above all things and I desire you in my soul.
Since I cannot receive you sacramentally now,
at least spiritually come to my heart.
As already come, I embrace you and I join you all;
do not allow me to ever separate you from You.

Posted by Jesus Caritas Est at 8:38 AM