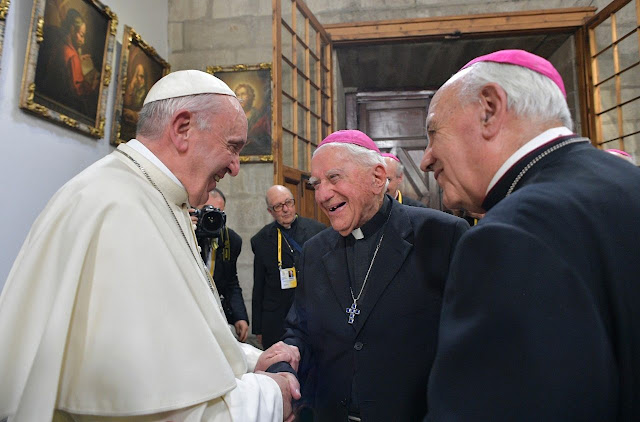 The Oldest bishop in the world has died. (pictured in middle)

Archbishop Emeritus of La Serena in Chile, Bernardino Pinera Carvallo, was 104 years old
The newspaper "La Tercera" (Sunday, June 21, 2020), reported that the retired Archbishop of La Serena, Bernardino Pinera Carvallo, died at the age of 104. Pinera, born on September 22, 1915, was the oldest bishop in the world and also an uncle of Chilean President Sebastian Pinera.

Arch. Bernardino Pinera was ordained a priest in 1947. He was initially an auxiliary bishop in Talca, then bishop of Temuco before becoming archbishop of La Serena. Pinera attended four meetings of the Second Vatican Council (1962-1965), according to Chilean media reports. From 1983 to 1988 he was chair of the Chilean Bishops 'Conference and also held functions within the Latin American Bishops' Council CELAM.

After Pinera's death, the former bishop of San Cristobal de La Laguna in Spain is Damian Iguacen Borau, born on February 16, 1916, is the oldest bishop in the world.