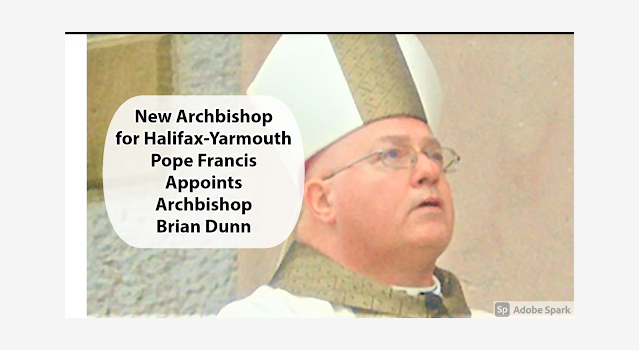 Archbishop Dunn was born on 8 January 1955 in St. John’s, Newfoundland. He obtained a Bachelor of Arts from King’s College as well as a Master of Divinity from the University of Western Ontario. He was ordained to the priesthood on 28 August 1980 for the Diocese of Grand Falls where he served as pastor and in a number of other responsibilities, including Vice-Chancellor and Chancellor. In 1991, he obtained a Doctorate in Canon Law from Saint Paul University (Ottawa) and soon after became a lecturer in the Diploma Program for Theology and Ministry at the Atlantic School of Theology, Halifax (1992-1999). Beginning in 2002, he served on the faculty of St. Peter’s Seminary in London, Ontario, and became Dean of Studies at the seminary until 2008. During this same time period, Bishop Dunn also served as a lecturer in the Faculty of Canon Law at Saint Paul University (2003-2004 & 2007). He was appointed Auxiliary Bishop of Sault Ste-Marie 16 July 2008 and ordained 9 October 2008. He was appointed Bishop of Antigonish on 21 November 2009 and installed 25 January 2010. He was appointed Coadjutor Archbishop of the Archdiocese of Halifax-Yarmouth on 12 April 2019.

Archbishop Mancini was born on 27 November 1945 in Italy. He obtained a Bachelor of Arts from Resurrection College at the University of Waterloo (1966) and a Licentiate in Theology Studies from the Grand Séminaire de Montréal (1970). He later pursued post-graduate studies in Ecumenical Theology at the University of Geneva (1971-1972) and completed his doctoral studies (Ph. D.) in Pastoral Theology at the Université de Montréal (1996). Following his studies in Geneva, he served as Assistant Director for the Canadian Centre for Ecumenism as well as Chaplain and Lecturer at Marianopolis College in Montréal. From 1977 to 1984, he served in pastoral ministry in parishes throughout the Archdiocese of Montréal and assisted as a member of the Coordinating Team for the papal visit of Pope Saint John Paul II in Montréal (1983-1984). From 1986 to 1998, he was National Director of the Canadian Centre for Human Development (1986-1997) and concurrently Assistant to the Director of the Office du personnel pastoral (1992-1996) and then Director of the Office for English Pastoral Services (1996-1998) for the Archdiocese. In 1998, he was appointed as Vicar General and Co-ordinator for Administrative and Financial Services for the Archdiocese and served in this role until 2007. On 18 February 1999, he was appointed Auxiliary Bishop of Montréal and ordained 25 March 1999. As Auxiliary Bishop, he served as the Moderator of the Diocesan Curia from 2002 until 2007. On 17 October 2007, he was appointed Archbishop of Halifax and Apostolic Administrator of Yarmouth. With the establishment of the new Archdiocese of Halifax-Yarmouth on 8 December 2011, he was appointed the first Archbishop of the new Archdiocese.

A Mass of Thanksgiving for the Ministry of Archbishop Emeritus Anthony Mancini and the Succession of Archbishop Brian Joseph Dunn as the 2nd Archbishop of Halifax-Yarmouth on 27 November at 12:15 p.m. (Atlantic) and livestreamed from St. Mary’s Cathedral Basilica. On 8 December at 12:15 p.m. (Atlantic) Archbishop Dunn will celebrate the Solemnity of the Immaculate Conception of the Blessed Virgin Mary with a Mass to be livestreamed from the Cathedral Basilica. The Mass, will likewise commemorate the 9th anniversary of the Archdiocese of Halifax-Yarmouth.

The Archdiocese of Halifax-Yarmouth has 88 parishes and missions, with a Catholic population of 180,834 served by 68 diocesan priests, 11 priests and 95 Sisters who are members of institutes of consecrated life, as well as 42 permanent deacons.