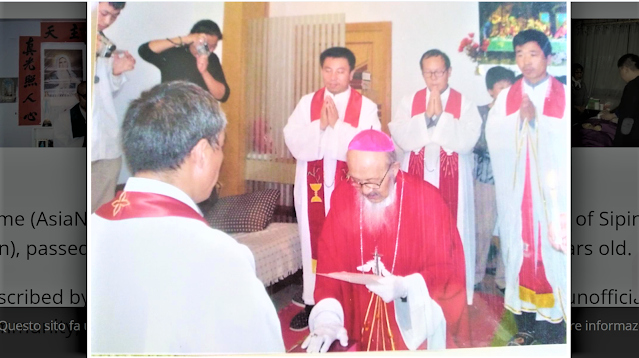 Asia News reports that Bishop Andrew Han Jingtao, a ‘giant of culture and faith’ of the underground Church, has died.
The biographical report by Bernardo Cervellera, found below, is from Asia News.
A great scholar, he spent 27 years in a forced labour camp, and later taught at a university. He was also appreciated by prison authorities. Upon becoming bishop in 1982, he divided his time between academic and pastoral work. After 1997 he was under constant police surveillance. He was a supporter of the Legions of Mary and founder of the Women's Congregation of Mount Calvary.

Rome (AsiaNews) – Mgr Andrew Han Jingtao, underground bishop of Siping (Jilin), passed away last night at 11pm (Beijing time). He was 99 years old.
Described by some faithful as “a giant of culture and faith” of the unofficial community, Bishop Han was a great scholar from an early age.
His first studies took place under the direction of Canadian missionaries from Quebec, to whom the apostolic vicariate was entrusted.
His great culture was even recognised by the authorities of the forced labour camp where he spent 27 years (1953-1980) for refusing to join the “independent and autonomous” Church, following Mao Zedong’s directives.
Once free, the authorities hired him to teach English at Changchun University. A few months later he became associate professor at the Institute for the History of Ancient Civilisations at Northeast Normal University.
He taught undergraduate, master and doctoral students, and introduced many Chinese to the study of classical cultures and languages (Latin and Greek).
In 1987 he retired from teaching, but not from his Church and missionary work. Even before his imprisonment, he had focused on educating the laity through the Legions of Mary, pushing them to pray, proclaim and engage in charity work. At the same time he had started a congregation of nuns, later called “Mount Calvary”.
He said that in the 1950s, the regime tried to “get rid of the Pope's interference and expel foreign missionaries. At that time, I realised that the Church was facing a great challenge and needed great strength to resist; otherwise, she would not be able to stand up. This is why I decided to establish a religious congregation.”
In 1982 he was appointed bishop of Siping, but his ordination took place in secret in 1986. For several years, he had to divide his time between pastoral work and university commitments.
In the early 1980s, the government unified all ecclesiastical districts in Jilin province into a single diocese, that of Jilin. The Diocese of Siping, still recognised by the Holy See, coves sections of Jilin province, Inner Mongolia and Liaoning.
Starting in 1997, his home came under constant surveillance making his ministry difficult. Even the congregation of nuns he founded went through a difficult time: convents shut down, members dispersed, secret reopenings, members living in various underground communities.
According to the latest figures, the diocese has about 30,000 members, including 20,000 in the unofficial Church and 10,000 in the official one, with 20 priests and a hundred religious Sisters.
The diocese also offers some social services, including an orphanage and a medical centre.
Full Text Source: Asia News.it