Pope Francis says "Faith must be the heart of the life and action of every baptized person." FULL TEXT to CDF 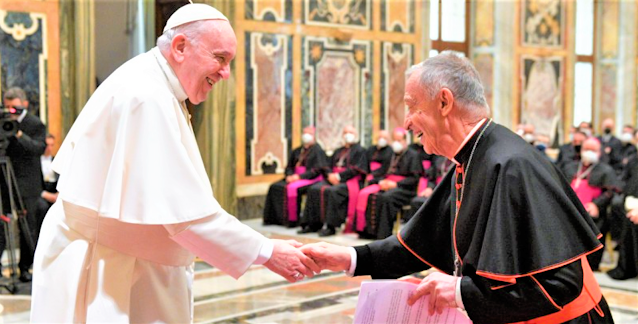 I am pleased to welcome you at the end of the work of your Plenary Assembly. I thank the Prefect for his introduction and I greet all of you, Superiors, Officials and Members of the Congregation for the Doctrine of the Faith. I renew my gratitude for your precious service to the universal Church in promoting and protecting the integrity of Catholic doctrine on faith and morals. Fruitful integrity.

On this occasion, I would like to share some reflections with you, gathering them around three words: dignity, discernment and faith.

The first word: dignity . As I wrote at the beginning of the Encyclical Brothers All , it is my great desire "that, in this time that we are given to live, recognizing the dignity of every human person, we can revive among all a worldwide aspiration to fraternity" ( no. 8 ). If fraternity is the destination that the Creator designed for the journey of humanity, the main road remains that of recognizing the dignity of every human person.

In our age, however, marked by so many social, political and even health tensions, the temptation is growing to consider the other as a stranger or an enemy, denying him a real dignity. Therefore, especially at this time, we are called to recall, "at every opportune and not opportune occasion" ( 2 Tm 4,2), and faithfully following a two thousand year old ecclesial teaching, that the dignity of every human being has an intrinsic character and is valid from the moment of her conception until her natural death. Precisely the affirmation of such dignity is the indispensable prerequisite for the protection of a personal and social existence, and also the necessary condition for fraternity and social friendship to be realized among all the peoples of the earth.

The Church, from the very beginning of her mission, has always proclaimed and promoted the intangible value of human dignity. Man is in fact the masterpiece of creation: he is wanted and loved by God as the partner of his eternal plans, and for his salvation Jesus gave his life to the point of dying on the cross for every man, for each of us.

I thank you therefore for the reflection you have initiated on the value of human dignity, taking into account the challenges that current reality poses in this regard.

The second word is discernment . Today more and more believers are asked the art of discernment. In the change of epoch we are going through, while on the one hand believers find themselves faced with new and complex issues, on the other, a need for spirituality increases which does not always find its point of reference in the Gospel. Thus it happens that not infrequently we have to deal with presumed supernatural phenomena, for which the people of God must receive sure and solid indications.

The exercise of discernment then finds an area of ​​necessary application in the fight against abuses of all kinds. The Church, with the help of God, is carrying out with firm determination the commitment to do justice to the victims of the abuses committed by its members, applying the foreseen canonical legislation with particular attention and rigor. In this light, I recently proceeded to update the  Norms on crimes reserved for the Congregation for the Doctrine of the Faith , with the desire to make judicial action more effective. This alone cannot suffice to stem the phenomenon, but it constitutes a necessary step to restore justice, repair the scandal and amend the offender.

A similar commitment to discernment is also expressed in another field that you deal with daily: the dissolution of the marriage bond in favorm fidei . When, by virtue of Petrine power, the Church grants the dissolution of a non-sacramental marriage bond, it is not just a matter of putting a canonical end to a marriage, which has already failed in fact, but, in reality, by means of this eminently pastoral act, I mean always favor the Catholic faith - in favorm fidei ! - in the new union and in the family, of which this new marriage will be the nucleus.

Let us not be satisfied with a lukewarm, habitual, textbook faith. Let us collaborate with the Holy Spirit and let us collaborate so that the fire that Jesus came to bring into the world can continue to burn and inflame the hearts of all.

Dear friends, I thank you so much for your work and I encourage you to move forward with the help of the Lord. And please don't forget to pray for me. Thank you.