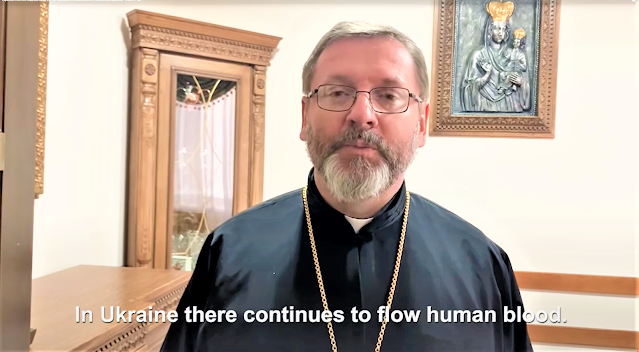 The head of the UGCC on the 31st day of the war: "Ukraine there is shedding of human blood, but we are united in the desire to live in an independent state"
Saturday, March 26, 2022, 11:32
Unity in prayer, unity in the Church, unity in activity, unity in service are the source of our hope, because only together can we endure. Only together can we win. This conviction was expressed by His Father and Head of the Ukrainian Greek Catholic Church His Beatitude Sviatoslav in his daily military address on the 31st day of the bloody war of the Russian Federation against Ukraine.
The head of state noted that Ukraine was on fire again that night.
Fierce battles were fought in Kyiv and Sumy regions. Kharkiv, Mariupol and other cities and villages of Ukraine suffered from Russian bombing. "Human blood continues to flow to Ukraine, but we are united in our desire to live in a free, independent state. And Ukraine is praying, "the bishop said.
The head of the UGCC said that yesterday we experienced a special day that will go down in history as a day of universal and all-Ukrainian unity. We were all united in prayer yesterday. We were called to this prayer by the Holy Father Francis, who is the sign and servant of the universal unity of the Church of Christ. We were united with him in prayer and in the completion of the Act of Consecration of Ukraine and Russia to the Immaculate Heart of Mary. And in that prayer we really united.
Zarvanytsia, the Ukrainian National Marian Center, became the center of unity in Ukraine. The bishops of the Synod of Bishops of the UGCC in Ukraine gathered here.
“We are united by the bishops of our Church from Central and Western Europe, North and South America and Australia, our clergy, monastics and all our people of God. Ukrainians in Ukraine and around the world have united. All the bishops of the Catholic Church united yesterday and prayed with us for the victory of Ukraine, for the victory of good over evil, for the end of the war, for God's truth and God's peace to truly win the war, the devil and his servants who provoke this war. Said His Beatitude Sviatoslav.
"Mother of God, save Ukraine, bless your children and grant us all victory!" - asked the Primate.
Source: http://news.ugcc.ua/video/glava_ugkts_u_31y_den_v%D1%96yni_ukrainoyu_llietsya_lyudska_krov_ale_mi_iednaiemosya_v_bazhann%D1%96_zhiti_u_v%D1%96ln%D1%96y_nezalezhn%D1%96y_derzhav%D1%96_96244.html