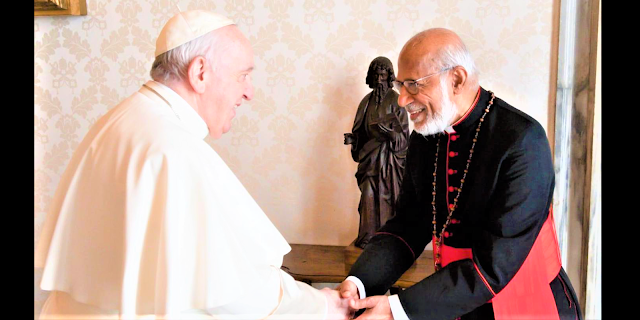 Pope Francis wrote a letter to the Archeparchy of Ernakulam-Angamaly, addressing the entire Syro-Malabar Church of the Archeparchy, India, concerning the form of celebration of the Holy Qurbana prior to Easter 2022.
(The Syro-Malabar Church belongs to the Eastern Rite Churches in full Communion with the Roman Catholic Church)
According to Vatican News, Pope Francis has addressed a paternal exhortation to the Archeparchy of Ernakulam-Angamaly, urging adherence to “the synodal decision concerning the form of celebration of the Holy Qurbana by Easter 2022” as determined by the Synod of Bishops of the Syro-Malabar Archiepiscopal Church.
The letter, see full text below, is dated 25 March and in it the Pope addressed a dispute that has arisen within India’s largest Eastern Church, following the decision by the Syro-Malabar Church Synod of Bishops “not only to approve certain liturgical texts but also the form of celebration in the way that it had been proposed some years ago.” 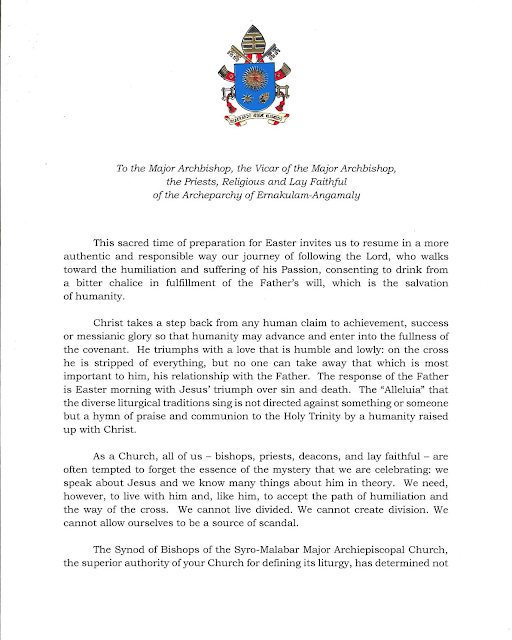 The Pope recalls that with that decision, “fully aware of the different traditions with the diverse contexts of your Church, all were asked to take a step back from their respective styles of celebration in order to offer a sign of communion born of the fact that everyone involved sacrificed something particularly their own, out of love and witness to something greater.” In the letter, the Holy Father pointed out that “as of 28 November 2021, the date chosen for the implementation of the Holy Qurbana, thirty-four Eparchies decided to enact the synodal decision.” 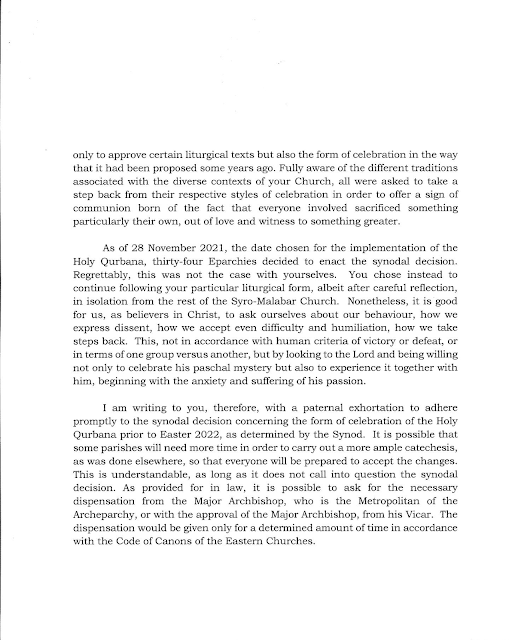 However, “regrettably, this was not the case” in the Archeparchy of Ernakulam-Angamaly where it “chose instead to continue following your particular liturgical form, albeit after careful reflection, in isolation from the rest of the Syro-Malabar Church.”
Nonetheless, the Pope notes that “it is good for us, as believers in Christ, to ask ourselves about our behaviour, how we express dissent, how we accept even difficulty and humiliation, how we take steps back.”
He adds that “this, not in accordance with human criteria of victory or defeat, or in terms of one group versus another, but by looking to the Lord and being willing not only to celebrate his paschal mystery but also to experience it together with him, beginning with the anxiety and suffering of his passion.” 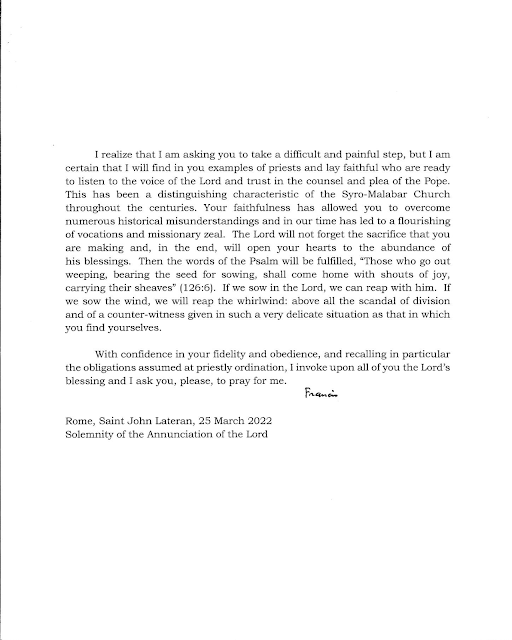 It is on this note that the Holy Father opened the letter with a reflection on Christ Himself, who “takes a step back from any human claim to achievement, success or messianic glory.” For this reason, Pope Francis stresses that “as a Church, all of us…we need to live with Him and, like Him, to accept the path of humiliation and the way of the cross. We cannot live divided. We cannot create division. We cannot allow ourselves to be a source of scandal.”
The Pope, thus, urges adherence to the synodal decision, considering, however, the possibility that “some parishes will need more time in order to carry out a more ample catechesis, as was done elsewhere, so that everyone will be prepared to accept the changes." “This is understandable,” the Pope says, “as long as it does not call into question the synodal decision.”
He adds that “as provided for in law, it is possible to ask for the necessary dispensation from the Major Archbishop, who is the Metropolitan of the Archeparchy, or with the approval of the Major Archbishop, from his Vicar” but “the dispensation would only be given for a determined amount of time in accordance with the Code of Canons of the Eastern Churches.”
Pope Francis notes that he realizes that he is “asking [them] to take a difficult and painful step,” yet he feels certain that he will find in them “examples of priests and lay faithful who are ready to listen to the voice of the Lord and trust in the counsel and plea of the Pope.”
Moreover, he notes, “this has been a distinguishing characteristic of the Syro-Malabar Church throughout the centuries. Your faithfulness has allowed you to overcome numerous historical misunderstandings and, in our time, has led to a flourishing of vocations and missionary zeal.” “The Lord will not forget the sacrifice that you are making,” the Pope assures, “and in the end, [He] will open your hearts to the abundance of his blessings.”
Concluding, the Pope notes: “if we sow in the Lord, we can reap with him, If we sow the wind, we will reap the whirlwind: above all the scandal of division and of a counter-witness given in such a very delicate situation as that in which you [the Archeparchy of Ernakulam-Angamaly] find yourselves.”
Source: Vatican News - Image from Cardinal George Alencherry (Head of the Syro-Malabar Church) visit to the Vatican in Feb. 2022: Source: https://www.facebook.com/maralencherry