Saint June 29 : St. Peter, Apostle and 1st Pope - the Patron of Fishermen, Bakers, and the Church 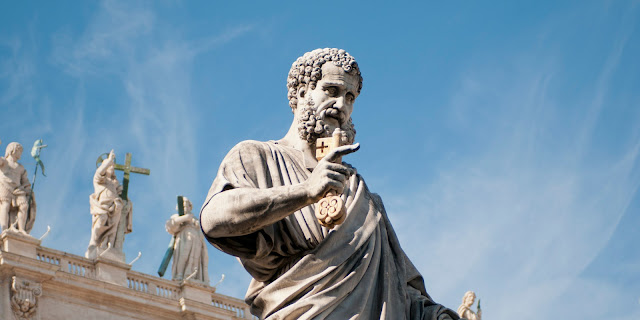 Feast Day:
June 29
Died:
64, Rome, Italy
Major Shrine:
St. Peter's Basilica
Patron of:
against frenzy, bakers, bridge builders, butchers, clock makers, cobblers, feet problems, fever, fishermen, foot problems, harvesters, locksmiths, longevity, masons, net makers, papacy, ship builders, shoemakers, Universal Church, many more...
June 29, we celebrate the Feast of Saint Peter and Paul, foundations of the Church, and martyrs for the faith. Instrumental in the formation and propagation of the faith, both Peter and Paul worked tirelessly after the crucifixion to continue spreading the Good News of Christ. While the Scriptures do not record the deaths of Peter or Paul, from an early date it has been said that they were martyred in Rome at the command of Emperor Nero, and buried there. As a Roman citizen, Paul was beheaded with a sword, whereas Peter was sentenced to crucifixion. However, proclaiming that he was not “worthy” of the same death that Christ endured, Peter was crucified with his head pointed downward.
Saint Augustine wrote of these holy men: “Both apostles share the same feast day, for these two were one; and even though they suffered on different days, they were as one. Peter went first, and Paul followed. And so we celebrate this day made holy for us by the apostles' blood. Let us embrace what they believed, their life, their labors, their sufferings, their preaching, and their confession of faith.”

Prayer: Almighty God, whose blessed apostles Peter and Paul glorified you by their martyrdom: Grant that your Church, instructed by their teaching and example, and knit together in unity by your Spirit, may ever stand firm upon the one foundation, which is Jesus Christ our Lord; who lives and reigns with you, in the unity of the Holy Spirit, one God, for ever and ever. Amen.
Saint Peter (1-64), disciple of Christ, first Pope, and “rock” of the Church., was born Simeon, but renamed by Christ to reflect his special role in the formation of the Church. He later confirmed his “new” name, and endowed him with the powers of the keys of heaven:
16Simon Peter answered, "You are the Christ, the Son of the living God." 17Jesus replied, "Blessed are you, Simon son of Jonah, for this was not revealed to you by man, but by my Father in heaven. 18And I tell you that you are Peter [translated as “the rock”], and on this rock I will build my church, and the gates of Hades will not overcome it. 19I will give you the keys of the kingdom of heaven; whatever you bind on earth will be bound in heaven, and whatever you loose on earth will be loosed in heaven." (Matthew 16: 16-19)
Jesus also specifically charged Saint Peter with the task of shepherding His flock as first Vicar of the Church. In Saint Peter and his successors, we have a visible sign of unity and communion in faith and charity:
15When they had finished eating, Jesus said to Simon Peter, "Simon son of John, do you truly love me more than these?" "Yes, Lord," he said, "you know that I love you." Jesus said, "Feed my lambs." 16Again Jesus said, "Simon son of John, do you truly love me?" He answered, "Yes, Lord, you know that I love you." Jesus said, "Take care of my sheep." 17 The third time he said to him, "Simon son of John, do you love me?" Peter was hurt because Jesus asked him the third time, "Do you love me?" He said, "Lord, you know all things; you know that I love you." Jesus said, "Feed my sheep. (John 21: 15-17)
Peter was born in Bethsaida on the Sea of Galilee. Like his younger brother Andrew, he was a professional fisherman and dwelt at Capernaum, where Jesus would stay, performing miracles, whenever he was preaching in that area. Following the miraculous catch of fish that Christ used to make them “fishers of men,” together with his brothers John and Andrew, Peter felt the call to become the first of Jesus' disciples.
Following his encounter with Jesus, Peter’s life changed dramatically. We know that he left his wife, family, and job to follow Christ. He served as the leader of the disciples, especially following the crucifixion, but beforehand as well. Peter occupied a privileged station as spokesperson for the group, as well as selection to be present at the Transfiguration and the Agony in the Garden. Somewhat quick to anger and temperamental, Peter’s words and deeds sometimes got him into trouble, but also set the stage for his thrice-over denial of Jesus, a lesson which led to great humility and prepared him for his position as Pope. After the Ascension of Christ, we know that Peter took a leading role, embracing the office of shepherd that had been entrusted to him. He delivered the first sermon on Pentecost, during the descent of the Holy Spirit, and confirmed the first Gentiles into the Church:
42He commanded us to preach to the people and to testify that he is the one whom God appointed as judge of the living and the dead. 43All the prophets testify about him that everyone who believes in him receives forgiveness of sins through his name." (Acts 10: 42-43)
But much of Saint Peter’s life is lost to history. We know that he was present at the Council of Jerusalem (where he gave support to preaching to the Gentiles, leading to the universality of the Church), became the first bishop of Antioch, received and visited with saint Paul, and labored in Rome as an apostle. He is responsible for appointed the replacement of Judas Iscariot, and was the first to perform miracles in the name of the Lord. He further wrote two epistles, the first Papal Encyclicals of the Church.
16We did not follow cleverly invented stories when we told you about the power and coming of our Lord Jesus Christ, but we were eyewitnesses of his majesty. 17For he received honor and glory from God the Father when the voice came to him from the Majestic Glory, saying, "This is my Son, whom I love; with him I am well pleased."18We ourselves heard this voice that came from heaven when we were with him on the sacred mountain. (2 Peter 1: 16-18)
Saint Peter was imprisoned by King Herod Agrippa, and was miraculously freed by an angel. Rather than turn from his apostolic mission, he returned to Jerusalem, traveled teaching the Good News, and returned to Rome (where he labored for 25 years, building the Church of God). He was crucified by Emperor Nero on Vatican Hill, and his relics are now enshrined under the high alter of Saint Peter’s Basilica. From the earliest days of the Church, Peter was recognized as the Prince of the Apostles and the first Supreme Pontiff. His see, Rome, has thus enjoyed the position of primacy over the entire Catholic Church.
O Glorious Saint Peter, because of your vibrant and generous faith, sincere humility and flaming love our Lord honored you with singular privileges and especially leadership of the whole Church. Obtain for us the grace of a living faith, a sincere loyalty to the Church, acceptance of all her teaching, and obedience to all her precepts. Let us thus enjoy an undisturbed peace on earth and everlasting happiness in heaven. Amen. Biography shared from 365 Rosaries Blog