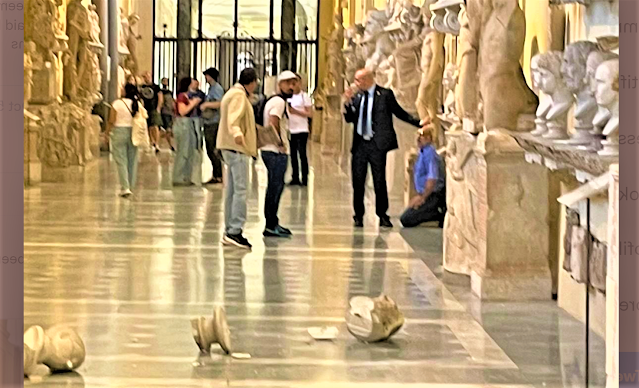 In Rome, a American tourist threw ancient busts to the ground in the Vatican Museums. Apparently, he was enraged because "He wanted to see the Pope" and was told he could not. He threw two antique busts from the Chiaramonti gallery on the ground, damaging them.
It happened in Rome around noon. The man, age 65, was immediately stopped, calmed down and handed over to the Gendarmerie.
The man, a 65-year-old, American tourist of Egyptian origins, wanted to see the Pope and when he was told that it was not possible he threw himself on a first bust and threw it to the ground, damaging it. Then the second bust fell as he ran. The busts are 2000 years old from Rome.
(See the 2:00 Mark on the Video Below)
"These are minor works, two small busts and now the experts are weighing the damage and proceeding to recover the fragments for immediate restoration".
With the Jubilee of 2025 coming up, the Vatican is strengthening the security sector in view of the Holy Year with a meeting scheduled for next week. Over ten thousand visitors enter the museums each day.
On May 21st, 1972 a 34-year-old Australian geologist of Hungarian origin László Tóth, evading surveillance, hit Michelangelo's Pietà with a hammer inside St. Peter's Basilica. The hammer struck the artwork fifteen times in a few seconds, shouting "I am Jesus Christ, risen from the dead!". Since then, the sculpture has been protected by a glass case.
Sources: https://roma.corriere.it/ and ilmessaggero.it/

Tragically, our first great post-pandemic tourist season has been marred by irresponsible tourists. A statue from the @Musei_Vaticani was smashed by a visitor yesterday.😱😭 pic.twitter.com/0Z2HwYgBOC