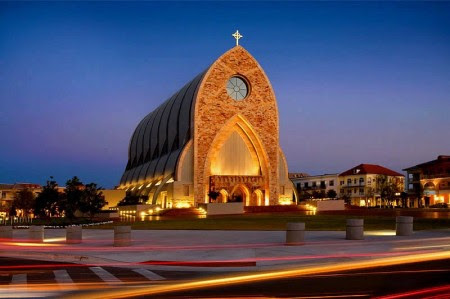 AVE MARIA UNIVERSITY REPORT: Ave Maria University is a vibrant university located in beautiful southwest Florida. It is an academic institution that pledges faithfulness to the teachings of the Church and is committed to offering one of the finest classical liberal arts curricula available, as well as opportunities for specialized study in all of the sciences, social sciences, and humanities.

Ave Maria University began as Thomas S. Monaghan’s dream to build an institution of Catholic higher education that would be faithful to the Magisterium and could produce the future faithful educators, leaders, and mentors that our challenged society needs. Through his initial financial donation of $250 million, in partnership with a generous donation of land from the Barron Collier Family in Southwest Florida, the dream began to take shape.

The United States leads the world in higher education, with more than 4,000 institutions of the most diverse kind—State, private, secular, and religious. The Catholic Church in America came late to the table in establishing colleges and universities, but by 1960 there were some 230 institutions, mainly founded by religious orders. Since then, the total number has hardly changed. The growth of older Catholic colleges and universities has often been accompanied by a degree of secularization. In a number of these institutions, the Catholic identity has become quite attenuated, with many (and in some cases most) of the faculty non-Catholic or hostile to the Church.

In the 40 plus years since the beginning of the Second Vatican Council, the Catholic population has increased by some 50 percent. Much of that growth has occurred outside the traditional Catholic enclaves in the cities of the northeast and midwest, as Catholics followed the burgeoning economies of the southeast and the west. Yet the religious orders, many suffering a drastic fall-off in vocations, did not respond to these demographic changes with new institutions in areas of growing Catholic population. Indeed, the last Catholic institution inaugurated as a university was in Bridgeport, Connecticut, in 1963.

By the time Mr. Monaghan began his dream, it was evident that higher education needed a fresh, faithful voice. It can well be argued that, if for no other reason, a Catholic university is essential to the transmittal of the faith to successive generations. "Train up a child in the way he should go, And when he is old he will not depart from it." —Proverbs 22:5-7 The role Ave Maria University intends to fill is not merely catechesis (although that has been woefully deficient in other institutions), but rather the ongoing reflection of theologians and philosophers on the integration of the truths of the faith with the social, cultural, economic, and political developments in society. This is perhaps the single most vital task for Catholic academicians: to explicate the truths of the faith, and measure against them the evolving societal propositions or practices in politics, the arts, the economy, etc. Two hundred or more years ago, those practices included slavery, laissez faire capitalism, and child labor. Fifty or more years ago, they included Marxism, Nazism, and Freudianism. Today they include abortion, fetal research, cloning, same-sex "marriage," moral relativism, and world terrorism. It is the graduates of Ave Maria University who will become the Catholic intellectuals needed to bring the truths of the faith to bear on these issues.