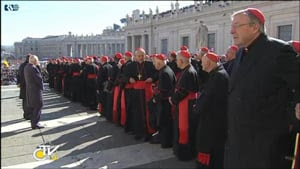 Cardinal George Pell - head and shoulders above the gathering
The Archbishop of Sydney Cardinal George Pell was one of around 70 Cardinals who witnessed Pope Benedict XVI's last general audience in St Peter's Square yesterday, describing the two hours as a moving and beautiful farewell to a much-admired Pope.
A crowd of between 150,000 and 200,000 also welcomed the Holy Father as he arrived in the Pope-mobile being driven slowly through the crowds and stopping often when a baby or young child was passed to him to be blessed.
In addressing the crowd the Pope said he understood the gravity of his decision to leave the pontificate but believed this was for the good of the church.
He He said he thought there were moments when the "waters were choppy and there were headwinds" but he was grateful for the understanding, support and prayers of a great many people. 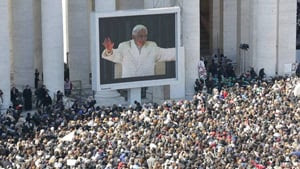 The final farewell to the faithful
Following the audience Cardinal Pell said; "It was a beautiful farewell. It was sad. There was an immense crowd - 150,000 to 200,000. Their affection for Pope Benedict was manifest.
"I think he was more than a little bit moved himself. But it was a beautiful farewell."  Cardinal Pell said he believed Pope Benedict will be remembered for many things including  the fact he was a brilliant thinker and a magnificent teacher. He was also very prayerful and humble.
"Pope Benedict also restored the tradition of the liturgy - that I think will be one of his greatest legacies," Cardinal Pell said.

SHARED FROM ARCHDIOCESE OF SYDNEY