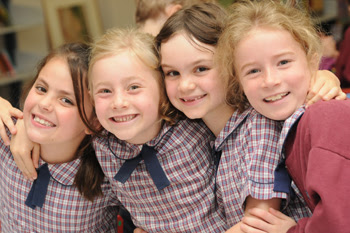 St Brendan's Primary students excitedly prepare for Catholic Schools Week
From Sunday, 10 March more than 68,000 students from Sydney's 149 Catholic primary and systemic secondary schools will showcase their talents, academic achievements and sporting ability as part of Catholic Schools Week.
Now in its eighth year, Catholic Schools Week is held across NSW and the ACT and is a chance for parents and local communities to see Catholic education in action and to help celebrate 180 years of continuous Catholic education in Australia.
"The theme this year is 'Every Child Counts' and I cannot think of a better statement that reflects what our schools are all about," says Dr Dan White, Director of Schools for the Archdiocese in Sydney.
At the helm of the Sydney Catholic Education Office (CEO), Dr White has responsibility for schools across the city. He is also in charge of more than 6000 staff and with his team at CEO, liases with around 100,000 parents to ensure that each young girl or boy is monitored, mentored and receives the very best in terms of an academic as well as a faith-based education. Youngsters Prepare for Catholic Schools Week
"As a parent who has had six children, there was nothing more important to myself or my wife than knowing that when they headed off to school each day, they were going to a safe place where they would be well looked after, be taught by great teachers and feel valued for who they were," he says.
Dr White is determined that every child who attends a Catholic school in Sydney is able to reach their full potential.
"Our schools create many opportunities for students to grow and thrive in what is an increasingly complex world," he says. "Our fantastic teachers and support staff place the learning and well being of every student at the centre of everything they do."
Students at Catholic schools, which are responsible for educating one in five Australian children, also receive overwhelming support from parent communities, Dr White says and believes all these factors are what make a Catholic education so special. 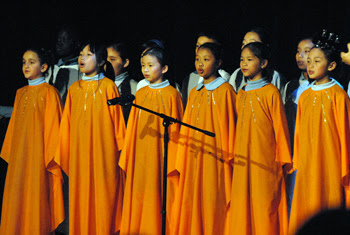 Choir at Our lady of the Roseary, Fairfield showcased their talents
By any measure Catholic schools are very successful. Dr White cites the 2012 NAPLAN (National Australian Program of Literacy and Numeracy) test results as an example. "For the fifth successive year, students at our schools performed above the state and national average," he says.
The HSC achievements by students at Sydney's systemic Catholic schools are equally impressive. In last year's HSC, Catholic students scored well above the state average in  72% of the courses undertaken.
"But good schools are about much more than just strong test results. Good schools build young people into strong confident learners who want to make a difference and who believe great things are possible for them. The Gospel  values of love, faith and compassion sit at the heart of what Catholic schools are all about and it is these values that call to us to reach out to all sections of society, especially to the disadvantaged and the marginalised," he says and adds that "Sydney Catholic Schools respond to this call every day." 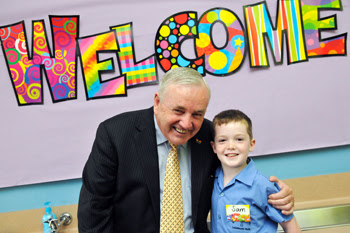 Dr Dan White with Sam, a young student from St Brendan's Kindergarden
Although schools and their students will strut their stuff this week, showcasing their talents as film makers, musicians or in some cases, turning the tables and becoming teacher to a classroom full of parents, Dr White warns that despite the strong achievements realised by Catholic educators, this is a critical time for education in Australia.
"Late last year the NSW Government made drastic cuts to the education budget that will hit our schools hard in the years ahead," he warns.
Catholic education along with private, independent and public schools are now awaiting details based on the Gonski Review of the Federal Government's new funding model.  Worryingly, this may also trigger cuts in funds forcing schools and particularly Catholic schools to do even more with far less.
"Every child is entitled to the best education our country can provide, regardless of what school he or she attends, or where that school is," Dr White says. "My strong hope is that our schools, like all other schools across Australia, are provided with sufficient funding that will allow them to deliver the high quality education our kids deserve."
For parents with children at Catholic schools or thinking about enrolling their child in a Catholic school, Catholic Schools Week which runs from 10-16 March is a chance for the public to see Catholic education in action.
To find out more go to http://www.ceosyd.catholic.edu.au
SHARED FROM ARCHDIOCESE OF SYDNEY