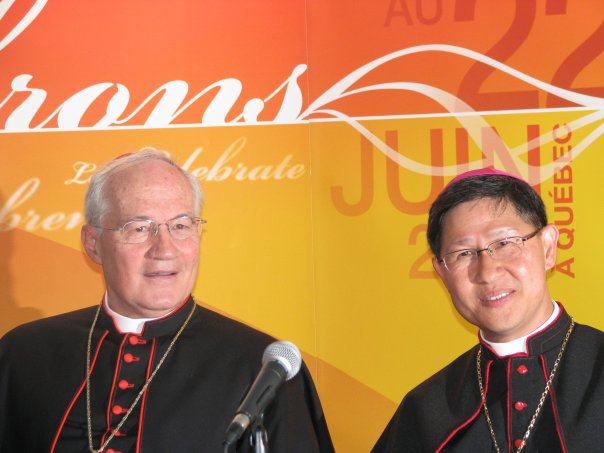 CARDINAL MARC ARMAND OUELLET (pictured on left) is from La Motte, Quebec in Canada. He is one of the leading Cardinals considered for the Pontificate. There have been numerous Popes from Europe, Asia and three from Africa but none from the North American Continent. He speaks many languages and has lived in South America, for ten years, where the majority of Catholics reside. Ouellet was born on June 8, 1944 to a family of eight children. He was ordained in 1968 and became a secular priest. In 1970 he went to Colombia, South America and taught in a seminary for ten years. He received a Doctorate in Dogmatic Theology from the Pontifical Gregorian University, in Rome, Italy. He was consecrated as Cardinal in October, 2003 by Pope John Paul II. His Cardinal motto is Ut Unum Sint, Latin for, "May they all be one".
He is pictured here with the Blessed Sacrament on procession during the Eucharistic Congress in Quebec in 2008: 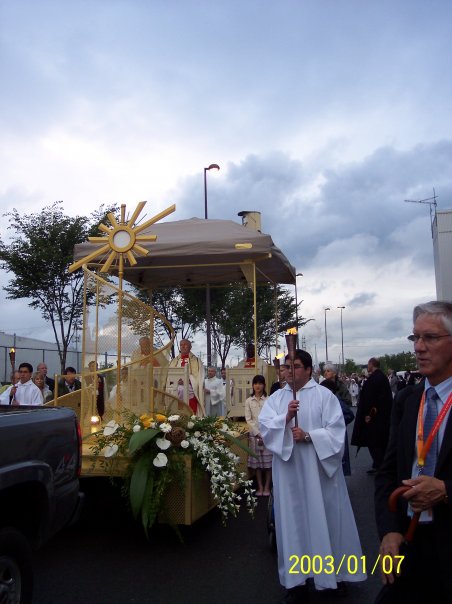 He attended the Teacher Training College of Amos where he completed his college and two years of philosophy and obtained a Baccalaureate in Education. He obtained a Licence in Theology from the University de Montréal at the end of his theological studies at the Grand Séminaire de Montréal (1964-1968). He was ordained to the priesthood for the Diocese of Amos in his home parish on May 25, 1968, and was appointed curate at Saint-Sauveur Parish in Val d’Or, from 1968 to 1970. He was sent to teach philosophy at the Major Seminary of Bogota, Columbia, then run by the Sulpicians and he decided to join the Society of Saint-Sulpice in 1972. Cardinal Ouellet continued his studies in Rome where, in 1976, he obtained a Licence in Philosophy at St. Thomas Aquinas Pontifical University. He was assigned as a faculty member and professor at the Major Seminary of Manizales in Columbia in 1974 until he was recalled to Canada to assume the same functions at the Grand Séminaire de Montréal.

In 1978, Cardinal Ouellet returned to Rome for further studies and obtained a Doctorate in Dogmatic Theology from the Gregorian University in 1983. He was then assigned as a faculty member and professor at the Major Seminary of Cali, Columbia, and was named rector of that Major Seminary from 1984 to 1989. He became rector of the Grand Séminaire de Montréal in 1990 and of St. Joseph’s Seminary in Edmonton in 1994. From 1996 to 2002, Cardinal Ouellet was titular of the Chair of Dogmatic Theology at John Paul II Institute for studies on marriage and family at the Lateran Pontifical University.

Cardinal Ouellet is the twenty-fourth bishop, fourteenth archbishop and seventh cardinal of Québec.