THE 2 BOSTON MARATHON BOMBERS have been caught. The two brothers Tamarlan Tsarnaev, age 26, was killed and his brother Dzhokhar, age 19 was apprehended by police. The city of Boston was under a complete lock-down with hundreds of police and military storming the city looking for the bombers. The elder brother, Tamarlan, was killed in a shoot out with police on Thursday. Sadly, a police officer named Sean Collier (below), age 26, was killed. He was shot as the bombers tried to rob a 7-Eleven store. The younger brother, Dzhokhar, (pictured right) was found in a boat parked outside a house in  a residential neighborhood in Boston. He had engaged in a shoot out with police and was captured covered in blood. The residents of Boston celebrated on the streets after the capture. They are both from an area near Chechnya close to Russia. However, they have lived in the USA since 2002. The brothers placed bombs near the finish line of the Boston Marathon killing 3 and wounding 160. (Images shared from Google) For more info see: 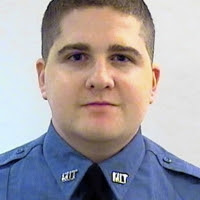