Mary of Warmun
The carved wooden sculpture of the Virgin Mary by the late Indigenous artist, George Mung Mung from the East Kimberly's Warmun community has been described as one of the great art works of the 20th Century. Now for the first time in almost 15 years, Sydney art lovers will have a chance to see Mary of Warmun as the sculpture is known along with other rare and breathtaking religious and spiritual artworks by Indigenous artists from the remote Warmun community.
Tomorrow, 1 May this priceless collection of Indigenous spiritual art featuring 25 paintings and four sculptures will go display at the Australian Catholic University's McGlade Gallery at Strathfield.
Entitled "Gifts of the Artists," the exhibition includes significant works by such renowned Indigenous artists such as Hector Jandany, Freddy Timms, Jack Britten, Queenie McKenzie Nakarra and Henry Wambiny.  Many of these paintings have not been seen in public before and it is believed this will be only the third time in the more than two decades George Mung Mung's carved sculpture of the Virgin has been seen by those outside the community.
"The sacred statue is an important and much loved icon and seldom leaves the community. So to have the people of Warmun and George Mung Mung's nephew, Patrick Mung give their permission to allow the statue to be part of this important exhibition is a great privilege and honour," says "Gifts of the Artists" curator, Lachlan Warner, who is also Coordinator of the Gallery and Senior Lecturer in Visual Arts and Design at ACU. Warmun Art Centre has become internationally recognised for Indigenous art.
Mr Warner who is working around the clock today in order to put the final finishing touches to the exhibition prior to tomorrow's opening, has no doubt that while all the works selected for this important showing are significant, Mary of Warmun will be the star attraction.
His view is shared by art historian, educationist, artist and curator of many of Australia's major exhibitions of spiritual and religious art, Sister of Mercy, Rosemary Crumlin OAM.
Sr Rosemary says George Mung Mung's sculpture not only has incredible presence and energy but in her view is "one of the great works of the 20th century."
"In fact I am sure it is," she says.
The sculpture was carved from a tree bough George found deep in the Bungle Bungles after a plaster statue of the Holy Mother was knocked off a table by dogs as a small group prayed around it. Indigenous artist Hector Jandany's Jesus Rising from the Grave
"That's when George promised he'd make them a Mary 'that would never break' and set off to find some suitable wood,'" Sr Rosemary says.
Originally called "the pregnant Mary," George's sculpture depicts her as a young woman painted with the body paint patterns reserved for unmarried Wamun girls.
"Her womb is like a shield under her heart where her unborn man-child dances. He is the One. She is the Mother," Sr Rosemary explains. "Mary of Warmun and the other artworks at the exhibition epitomise what the two pillars of the Warmun culture which are - the Dreaming or Ngarrangkarni which centres on the living land, the ancestors and their stories, and the Bible, especially the Creation and the Jesus and Mary gospel stories."
The people of the community describe their culture simply as "two way." Or as the late great Warmun artist, Hector Jandany told Sr Rosemary, "We always knew about Ngapuny (God) and the Spirit but youse mob had to tell us about Jesus and Mary." The Spirit of MacKillop by renowned Warmun artist Queenie McKenzie Nakarra
Another of the highlights of the exhibition are Hector Jandany's evocative series of four paintings depicting the Crucifixion and the Resurrection.
"The paintings are quite beautiful with a simplicity and elegance the way he conceives the Body of Christ with the Virgin Mary and Saints all around Him."
Sr Rosemary says a hallmark of the work of the Warmun artists is the sheer physical beauty of their paintings and sculptures. "Nearly all the works are made with ochre which is typical of the Warmun style of art, minimal and pared down and raw, but beautifully executed."
What is less well known is that the Warmun's works of religious and spiritual art were created as teaching tools for the children at the community's Christian school.

"George, Hector , Queenie and a number of other artist would come down to the school carrying a painting under their arms to teach the kids about the story of Christ as well as the stories of their own culture. They'd teach them songs and dances and tell them about Dreamtime and Christian Dreamtime."

Sr Rosemary Crumlin rsm
Unlike many Indigenous communities, Warmun discovered Christianity not through missionaries but by one of their own respected elders. A senior woman in the community had been sent to aleprosarium in Derby and became a Christian. When she returned to Warmun she fought to have a Christian school built, and held a series of interviews on the best people to do this.
"In 1979 it was this woman and other elders including George, Hector and Queenie who chose the Sisters of St Joseph to establish the school and Warmun's involvement with the Sisters has continued ever since," she says.
Lachlan Warner describes the exhibition as an important one on many fronts not only for the importance and significance of the artists represented but for the beauty of the works and as a visual testament to the melding of Aboriginal and Christian spirituality over the past 40 years.
The opening of the exhibition tomorrow at the McGlade Gallery comes just 24 hours after Warmun artist, Lena Nyadbi Lely made history in Paris after news was released that her Dayiwul Lirlmim (Barramundi scales) painting, which hangs in the Musee du Quai Branly, would be stencilled on to a 700 square metre section of the museum's roof where it  will be visible from Google Earth when it is unveiled in June. 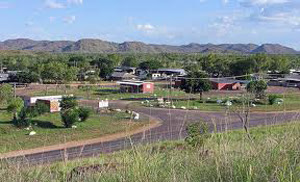 Warmun Community has close links with Mary MacKillop
The exhibition: Gifts of the Artists will be on display at the McGlade Gallery, Barker Road, Strathfield from 11 am until  4 pm Monday to Saturday.
SHARED FROM ARCHDIOCESE OF SYDNEY
Posted by Jesus Caritas Est at 5:28 PM