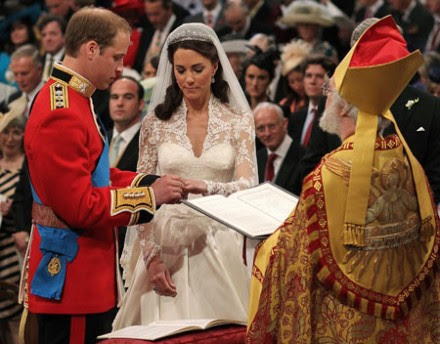 Prince William and the Duchess of Cambridge exchange rings during their marriage ceremony (CNS photo/Dominic Lipinski, pool via Reuters)
The Church expects Catholic spouses to do all they can to raise their children as Catholics but does not censure them if they are unable to do so, a Government spokesman has told the House of Lords as it debated changes to the system of Royal succession.
Lord Wallace of Tankerness, speaking on behalf of the Government, said he had been advised on the matter by Mgr Marcus Stock, general secretary of the Bishops’ Conference of England and Wales.
“I have the specific consent of Mgr Stock to say that he was speaking on behalf of Archbishop Nichols as president of the Catholic Bishops’ Conference of England and Wales and can inform the House that the view taken by the Catholic Church in England and Wales is that, in the instance of mixed marriages, the approach of the Catholic Church is pastoral,” he said.
“It will always look to provide guidance that supports and strengthens the unity and indissolubility of the marriage. In this context the Catholic Church expects Catholic spouses to sincerely undertake to do all that they can to raise children in the Catholic Church. Where it has not been possible for the child of a mixed marriage to be brought up as a Catholic, the Catholic parent does not fall subject to the censure of canon law,” Lord Wallace continued.
The remarks were made during the third reading debate of the Succession to the Crown Bill in the House of Lords on Monday.
For the first time in more than 300 years legislation would allow British monarchs to marry Catholics. The sections of the 1701 Act of Settlement that insist on the sovereign being a member of the Church of England will, however, remain in place.
The Bill will also end the rule of male primogeniture and permit female first-borns to have the right of succession over any young brothers.
The Bill means that if the child of Prince William and the Duchess of Cambridge, due in July, is a girl, she will have the right to rule ahead of any younger brothers and will also be free to marry a Catholic.
Some members of the House of Lords were deeply concerned that the Code of Canon Law compelled a Catholic spouse to raise his or her offspring as Catholics.
Canon 1125 requires that in a mixed marriage the Catholic “is to make a sincere promise to do all in his or her power in order that all the children be baptised and brought up in the Catholic Church”.
Lord Cormack attempted to introduce an amendment to put beyond doubt the requirement that the sovereign be a Protestant and in communion with the Church of England. This was withdrawn after Lord Wallace revealed the assurances of the Catholic hierarchy.
The Bill passed third reading, meaning it has passed through both Houses of Parliament and requires only Royal Assent before it becomes law later this year.
SHARED FROM CATHOLIC HERALD