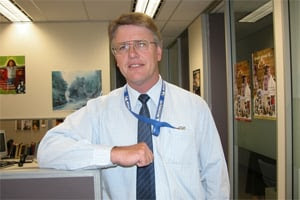 Chris Meney, Director of the Life, Marriage and Family Centre for the Archdiocese of Sydney
A powerful series of short videos produced by the Australian Catholic Bishops Conference (ACBC) to bring a greater understanding of difficult life and death issues from euthanasia to abortion and reproductive technologies has been developed by the some of the nation's leading bioethicists, theologians, doctors, academics and pastoral carers.
"Often the Church's teachings on matters like abortion, euthanasia and reproductive technologies are misunderstood and at times they are not well presented," says Bishop Eugene Hurley, Chair of the ACBC's Catholic Life Council explaining that too often these issues are presented with a legal edge rather than with compassion and understanding of how we should care for those facing life and death challenges.

"Often the compassionate heart of Christ gets lost in legalistic or judgemental language and people feel they cannot turn to the Church or to Christians for support," he says. Abortion can trigger longterm trauma and distress for a woman
The videos which are also available as DVDs explains the Church's pastoral position and are designed to inform, educate and create a deeper understanding of these issues particularly from a pastoral point of view. Reaching out in love and forgiveness to those who have suffered, the Life Issues videos also provide resources for healing.
Inspired by the words from John's Gospel: "For God So Loved the World that he gave his one and only Son, that whoever believes in him shall not perish but have ever lasting life," this important series of short videos arrive at a time when each of the three issues addressed are not only making headlines but are triggering further confusion, controversy and consternation.
In NSW a private members bill to legalise euthanasia is currently before the Legislative Council. Brought by Greens senator, Cate Faehrmann, the Bill for the Rights of the Terminally Ill which advocates voluntary "mercy killing" will be debated for the third time today, Thursday 23 May.
Greens and also the  Independent MP, Alex Greenwich have bombarded constituents across NSW with emails and leaflets urging them to get behind the bill and urge their local member to vote for the passage of bill that would make euthanasia legal throughout the state.
Abortion is also in the news with the Federal Government in Canberra finalising details to place the drugs RU486 (mifepristone), better known as the abortion, and its companion drug GyMiso (misoprostol) on the tax-payer funded Pharmaceutical Benefits Scheme. The move by Minister of Health, Tanya Plibersek will not only make chemically-induced abortions widely available to women across Australia but under the PBS subsidy, will bring down the cost from around $3000 to just $36.10.

Greens MP Cate Faehrmanns bill to legalise euthanasia will again be debated by NSW Parliament tomorrow
Meanwhile in the US, Oregon scientists announced six days ago that they had successfully human skin cells into embryonic stem cells, developing these unfertilised cells to seven days growth in the lab. This latest development in reproductive technologies which for the first time moves scientists well on the path to human cloning has been condemned by Cardinal Sean P.O'Malley of Boston who chairs the US Bishops Committee on Pro-Life Activities who said the process used by scientists created and destroyed 120 human embryos, which the Church considers human life that must be protected.
"Creating new lives in the laboratory solely to destroy them is an abuse denounced even by many who do not share the Catholic Church's convictions on the sanctity of human life," he says.
The Oregon scientists hope to use laboratory created embryos and their stem cells to grow human organs for transplant or to cure diseases which raises further important ethical questions.
"This new breakthrough is particularly troubling," says Chris Meney, Director of the Archdiocese of Sydney's Life Marriage and Family Centre. "To create human life so as to destroy it, reflects a stubborn refusal to honour the dignity of each human person and is a rejection of the principle to always treat every human being as an end and never as a means."
Mr Meney is further concerned about a number of suggested legislative changes in Australia that do not reflect "a full understanding of the preciousness of every human life."
"The Catholic Church recognises these challenges and also her responsibility to act as protector to the poor and vulnerable in our society. The Church teaches and strives to love and support people through all stages of their life journey, knowing they deserve respect and love from their moment of conception until natural death," he says. US scientists announce breakthrough in lab-created human embryos
Despite the good intentions by the many who advocate euthanasia or physician assisted suicide, Mr Meney says the end result is one where we eventually abandon those whose suffering we cannot bear.
In relation to the Government's decision to subsidise the abortion pill, RU486 and its companion drug GyMiso and also make the drugs widely available, Mr Meney points out that not only have chemical abortions been documented to have caused death in some women and endangered others by triggering severe bleeding, pain and life-threatening infections, but that they also cause the unjust killing of the woman's child by literally starving the early-stage baby of nutrients and over a period of days forcing it to detach from the womb.
"The life issues film on abortion invites women to seek out the Church when they are facing unplanned pregnancy or grappling with the damage of post abortion trauma," he says and gives his full endorsement to the three videos which are timely, informative and a much needed pastoral resource.
Access the videos by logging on to www.godsolovedtheworld.org.au. A DVD version of the videos is also available from the site's donation page.
shared from ARCHDIOCESE OF SYDNEY