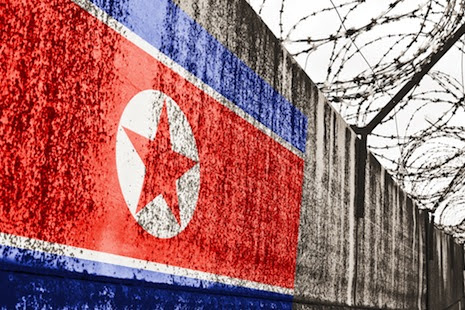 (North Korea image: Shutterstock)
During the interview, Fr. Eun-hyung described the tragic conditions the North Korean population is living in and spoke about his travels, the last being a visit to the capital of North Korea in 2011. “On each visit I celebrated Holy Mass in the Catholic church of "Jangchung", named after the city district where it is located. North Korean believers attended. Nevertheless the North Korean authorities told me it was strictly forbidden for me and those working with me to contact the country's citizens personally.” Fr. Eun-hyung explained that the church of Jangchung was unique in that its faithful were led by a layman who celebrated the Liturgy of the Word every Sunday.” This must be true because “as far as I know” he said “there are no Catholic priests living in North Korea at present.”
When asked how many Catholics remained in North Korea, Fr. Eun-hyung said “It's difficult to say.” “The North Korean authorities told us that there are 3,000 Catholics in the country. But we don't know whether this figure is correct, or how it was arrived at.” The last time any accurate figures were obtained was back in 1945, when Koreas was divided in two. “There are old documents which show that there were about 50,000 Catholics living in the north before the division of the country.” “A very lively missionary work went out from here. The mother of the dictator Kim Il-sung (1948-1994), for example, came from a very pious Protestant family,” the priest said. There were also many Christians churches around at the time but almost all of these –except the church of Jangchung – were destroyed during the war of 1950-53 or used for other purposes under the regime.
Today, North Korea is one of the biggest culprits of religious freedom deprivation, but despite the years of religious persecution, Fr. Eun-hyung believes “there are still about 10,000 people who will remember in their hearts their Catholic faith.” This seems to be confirmed by the testimonies of a number of North Korean refugees, who speak of elderly women setting in circles counting beans and murmuring, as if they were reciting the Rosary. But the priest claims it is unlikely an underground church exists in North Korea, although some say there is one close to the border with China.
“When I passed the demarcation line by truck it was like travelling in a time machine. I felt like I'd gone back 40 or 50 years … Apart from the great problem of food, North Korea suffers from a major lack of heating material,” Fr. Eun-hyung remarked. “Many North Koreans therefore clear the wooded mountains and burn the trees for heating purposes. This means that the mountains of North Korea are becoming increasingly bare. This in turn gives rise to various natural disasters such as flooding and landslides. The effect of this on agriculture is devastating and just makes the food problem even worse.So that people don't have to sit in the cold, we launched winter actions in 2007 in which we have to date brought 300,000 coal briquettes in trucks to near Kaesong in other words a few kilometres behind the military demarcation line,” he said. “He went on to say that although “personal contact with the residents of North Korea was strictly forbidden,” the voluntary workers eventually got talking to the locals and listened to their problems.
But in May 2010 “the government in Seoul suspended its relief to North Korea.” “At the present time our relief efforts for North Korea have to remain in abeyance. As soon as the present crisis has passed, we will wait until the policy in South Korea takes a different turn to that of the government of President Lee Myung-bak (2008 to February 2013) with regard to the North,” the priest said. The Committee for the Reconciliation of the Korean People keeps on receiving requests for aid through Catholic Association Joseon, the only one that is recognised by the Kim Jong-uk regime. And the church of Jangchung is in urgent need of renovation work.
After months of tensions, North Korea recently expressed a wish to resume talks with Seoul. Fr. Eun-hyung believes dialogue between the two Koreas is the only solution. The tensions have made life worse for the North Korean people. And the South Korean economy is also suffering as a result. “The way out of this nightmarish situation for South and North Korea is dialogue and agreements, collaboration and exchange Fr.” Eun-hyung said in conclusion.
SHARED FROM UCAN NEWS/VATICAN INSIDER