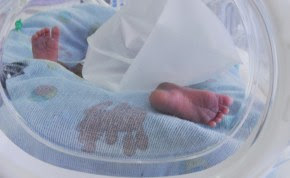 Photo: Lauren Everitt/AllAfrica
Preterm infants.
As security agencies intensify efforts to eliminate the 'baby factory' phenomenon in Abia State, the State Security Service (SSS) yesterday paraded 16 pregnant ladies rescued from a baby factory located in Aba, the commercial nerve centre of the state.
Director of SSS, Abia State command, Matthew Obodoechi, who briefed journalists, said that the girls whose ages range between 17 and 37 years were rescued on Monday from a so-called "charity home" named Cross Foundation International, located along Anyamele Street, Umungasi, Aba.
On seeing journalists inside the room where they were kept at the SSS state headquarters, Umuahia, many of the pregnant ladies began to weep profusely.
Obodoechi said that the proprietor of the baby factory, Dr. Hyginus Ndudim Orikara, was arrested Wednesday morning, vowing that the medical practitioner, who is in the employment of the Abia State Government, would be prosecuted.
The SSS chief expressed concern that baby factory phenomenon had become a new criminal trend in Abia State and other south-east states.
"It is another form of kidnapping where babies are snatched at the point of birth and sold," adding, "it is a big shame, a big problem and it all boils down to the kind of values we have in the society today where life is not valued," Obodoechi lamented.
Orikara however denied running a baby factory. He told journalists that his Cross Foundation was legitimately registered as a charity home, adding that babies were not sold after delivery but released to the mother to go home and nurse the baby.
Orikara explained that the presence of the large number of girls at his foundation was because "we are running operation nurse your own baby", whereby girls with unwanted pregnancy are brought to the home for them to be encouraged and assisted to carry their pregnancies to full term, deliver and nurse the babies.
But the SSS director said the confessional statement made by the pregnant ladies revealed that Orikara was indeed operating a baby factory as the ladies "upon delivery are given a paltry sum of N50,000 and sent away while their babies are sold to people from different parts of the country."
He regretted that some persons have chosen to hide under the cover of non-governmental organisations (NGOs) "to perpetrate various forms of illegal activities, including the illicit baby trade."
"Those hiding under the cover of NGOs to perpetrate modern forms of slave trade are warned to stop such illegalities as security agencies will stop at nothing to ensure that they are apprehended and made to face the law," the SSS director said.
He also advised members of the public "to desist from encouraging pregnant ladies to go to baby factories for whatever reason, whether financial or otherwise."
SHARED FROM This Day/Allafrica.co
m