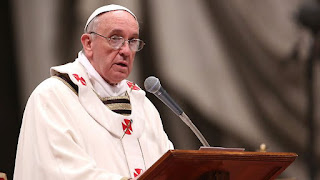 Pope Francis addressed priests studying to be diplomatic representatives of the Vatican yesterday.

He gave them a profound piece of wisdom.

What did he say?

I am not kidding, and I couldn't be more thrilled that finally someone, and the pope no less,  is saying what many have been thinking: Vatican diplomat means service in the name of Christ Jesus -- it is not a station on par with secular diplomats, and this should be reflected in both demeanor of holiness and service.

What pope in recent times spoke the truth so simply?

John Paul the Great was a philosopher and visionary. His writings, homilies and addresses were eloquent and rich in wisdom, but not simple.

Benedict XVI was a master educator and theologian, brilliant in every regard. His writings, homilies and addresses were eloquent and rich in wisdom, but not simple.

Enter the new pope -- Pope Francis. A man of deep humility; the odor of sanctity is upon him.

This man is meant for this time in salvation history. God's timing is perfect, and what He has sent us through the inspiration of the Holy Spirit is a Vicar of Christ who leads by virtue of prayerful service, not by virtue of intellect (although, that is obviously not lacking).

He is the beatitude pope -- for to live them well, one must practice them daily. We see this in his witness.

He is the people's pope -- for he speaks the language of the masses: direct, clear and unequivocal.

He is the shepherd's pope -- for he looks at those in his service and first serves them with love and affection, caring deeply about their holiness, their priesthood, their holy orders, their vows.

He is the world's pope -- for the emerging message of his pontificate is that first we must be holy, striving to renew and restore what and who we are so that we can be a credible influence on the world.

It is difficult to criticize Pope Francis precisely because of how he behaves. He's a mystery to the secular world, the left leaning Catholic, the social justice driven faithful, because he agrees with them wholly and substantially that service to the poor is quintessential to being a Christian.

His humility is coupled with veracity -- the fullness of truth is both his sword and his shield. And, that leaves many people scratching their heads.

For instance, in remarks made on 5 June, the day the UN celebrates as "World Environment Day", Pope Francis offered this:

This culture of waste tends to become the common mentality that infects everyone. Human life, the person is no longer perceived as a primary value to be respected and protected, especially if poor or disabled, if not yet useful - such as the unborn child - or no longer needed - such as the elderly.

The "Culture of Waste"!

He speaks their language; they want to fawn all over him as a result, but it is not spoken without doctrinal context.

How does one contend with a pope like this?

The answer is simple: Love, Obey, Serve -- and don't be ridiculous!
About the Author: Kathy Vestermark, MA Theology

I am a Catholic wife and mother with an MA in Theology and a Catechetical Diploma. I love to study and teach the Faith. I have six children, one with significant special needs. My life is full of love and challenges. This is where I will share those moments and reflections on life and faith with you.
Her Blog: http://faithonthehighwire.blogspot.ca/