NEW PRESIDENT OF US COUNCIL OF CATHOLIC BISHOPS JOSEPH KURTZ 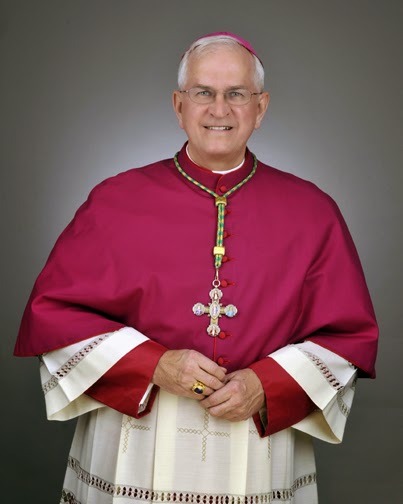 USCCB REPORT: Archbishop Joseph E Kurtz of Louisville, Kentucky, was elected president of the US Conference of Catholic Bishops (USCCB) during the bishops' annual fall General Assembly on 12 November, in Baltimore. Archbishop Kurtz has served as vice president of USCCB since 2010. Cardinal Daniel N. DiNardo of Galveston-Houston was elected USCCB vice president.

Archbishop Kurtz and Cardinal DiNardo are elected to three-year terms and succeed Cardinal Timothy Dolan of New York and Archbishop Kurtz, respectively. The new president and vice president's terms begin at the conclusion of the General Assembly, 14 November.
Archbishop Kurtz was elected president on the first ballot with 125 votes. Cardinal DiNardo was elected vice president on the third ballot by 147-87 in a runoff vote against Archbishop Charles J Chaput, OFM Cap, of Philadelphia.
The president and vice president are elected by a simple majority from a slate of 10 nominees. If no president or vice president is chosen after the second round of voting, a third ballot is taken between only the top two vote getters on the second ballot.
Archbishop Kurtz was born on August 18, 1946, and ordained a priest of Allentown, Pennsylvania on March 18, 1972. He previously served as bishop of Knoxville, Tennessee from 1999-2007 before being appointed to Louisville. Cardinal DiNardo was born May 23, 1949, and ordained a priest of Pittsburgh on June 16, 1977. He previously served as bishop of Sioux City, Iowa, from 1998-2004 before being appointed to coadjutor bishop, then archbishop, of Galveston-Houston. Pope Benedict XVI named him a cardinal in 2007, making him the first cardinal from Texas.
The bishops also elected Archbishop George J Lucus of Omaha chairman of the Committee of Catholic Education in a 141-93 vote over George V Murry, SJ, of Youngstown, Ohio. Archbishop Lucas, who has served as interim chair of the committee since the May 2013 death of Bishop Joseph P McFadden, will begin his term at the conclusion of this week's bishops' meeting.
The bishops chose chairmen-elect of five other USCCB committees. The chairmen-elect will begin their three-year terms in one year, at the conclusion of the bishops' fall 2014 General Assembly. These were:
Coadjutor Archbishop Bernard A Hebda of Newark, New Jersey, to the Committee on Canonical Affairs and Church Governance in a 167-70 vote over Bishop Joseph N. Perry, auxiliary bishop of Chicago.
Bishop Mitchell T Rozanski, auxiliary bishop of Baltimore, to the Committee on Ecumenical and Interreligious Affairs in a 130-105 vote over Bishop Arthur L. Kennedy, auxiliary bishop of Boston.
Archbishop-designate Leonard P Blair of Hartford, Connecticut, to the Committee on Evangelization and Catechesis in a 135-98 vote over Bishop John O Barres of Allentown, Pennsylvania.
ishop Oscar Cantú of Las Cruces, New Mexico, to the Committee on International Justice and Peace in a 126-110 vote over Bishop David J. Malloy of Rockford, Illinois.
Bishop Edward J Burns of Juneau, Alaska, to the Committee on Child and Youth Protection in a 118-114 vote over Bishop Robert J Cunningham of Syracuse, New York.
On November 11, the following bishops were elected to the board of Catholic Relief Services (CRS): Bishop William P Callahan, OFM Conv., of La Crosse, Wisconsin, Bishop Frank Dewane of Venice, Florida, and Bishop Cirilo B Flores of San Diego.
Also on November 11, the following bishops were elected to the board of the Catholic Legal Immigration Network, Inc. (CLINIC): Bishop Richard Garcia of Monterey, California, and Archbishop Thomas Wenski of Miami.
In November 2012, Cardinal DiNardo was elected to chair the Committee on Divine Worship for a term beginning this week. Since his election as USCCB vice president prevents him from assuming leadership of the committee, the bishops elected Bishop Arthur J. Serratelli of Paterson, New Jersey to chair the committee in place of Cardinal DiNardo, beginning November 14. Bishop Serratelli was chosen in a 114-112 vote over Archbishop Allen H Vigneron of Detroit. Bishop Serratelli previously chaired the committee from 2007-2010.
Source: USCCB

Committee and Board Election Results

The following bishops were elected: