AMAZING CHRIST THE REDEEMER STATUE HIT BY LIGHTNING IN BRAZIL 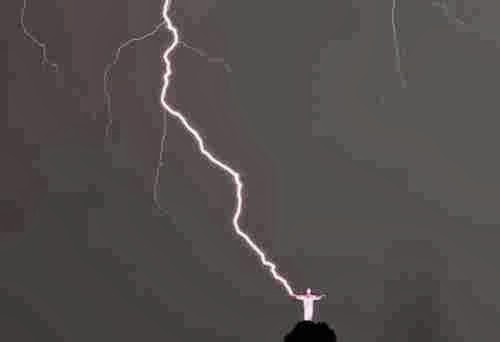 The 125-foot (38 meter) Christ the redeemer statue is located in Brazil, South America on steep mountain and is often hit by strikes.  A lightning bolt broke off a few fingers on his right hand.
On Thursday, January 16, 2014 more than 40,000 lightning flashes hit the area during the three hour storm. On average, Christ the Redeemer usually gets struck with lightning 3-5 times per year.
The statue underwent a $4 million renovation in 2010 to repair badly eroded parts of its face and hands. The Archdiocese of Rio manages the statue. Father Omar Raposo told Globo Radio that repairs will soon be made. He says the church has a stock of the same stone originally used to build the statue, which was erected in 1931.
Edited from Times of India and other news sources