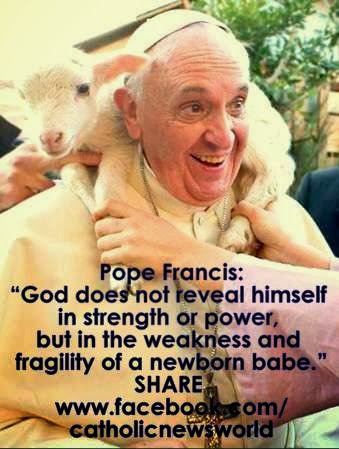 (VIS) - At 4 p.m. the Pope made a private visit to the Roman parish of St. Alphonsus Maria Liguori to see the living nativity display organised by the faithful of the parish, in which two hundred people participated. The visit was in response to an invitation sent by the parish.
Accompanied by more than three thousand people, the Pope was received by Cardinal Agostino Vallini, vicar general of His Holiness for the diocese of Rome, Bishop Guerino Di Tora, and the parish priest Fr. Dario Pompeo Criscuoli. The Holy Father greeted all those present, demonstrating warmth and closeness to the people. He joked with children, held one of the lambs from the Nativity display on his shoulders, and tasted the ricotta cheese made by the parishioners.

According to CNS - (Selection from CNS report by Carol Glatz) 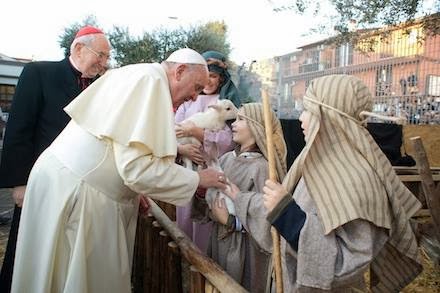 200 people took part in the re-enactment, wearing period costumes and playing the parts of villagers, artisans and street sellers. People lined the sides of the road leading to the church and watched from rooftops and balconies of surrounding buildings. According to Vatican Radio, the pope greeted each of the participants and many of the parishioners who attended. One special guest lay waiting in a small hut: a 2-month-old baby named Francesco, who had been baptized that morning and played the role of Jesus in the pageant. A group of men playing shepherds placed a small lamb on the pope's shoulders, according to the Italian Catholic daily, Avvenire. Children sang a Christmas song and gave the pope a bouquet of red roses. At the end of his visit, the pope talked about the importance of a new year beginning with Jesus, who stays by everyone's side to overcome evil. He asked everyone to pray for children who would be born in 2014 and for all grandparents, who he said are the source of wisdom. The priest who organizes the parish's live Nativity scene each year said he had invited the pope just a few days earlier and the pope had accepted immediately. "The pope was so happy. He told me 'Keep it up. Don't get discouraged.'" (Edited from CNS)
Posted by Jesus Caritas Est at 12:08 PM