Farewell Mass for Cardinal Pell of Australia with thousands attending Cardinal Pell with his brother Bishops and Archbishops following the Mass
Nearly three thousand people attending Cardinal Pell's farewell mass at St Mary's Cathedral on Thursday night.
They travelled from all over Sydney, the north and south coasts and interstate.
Bishops and Archbishops from around Australia were there along with priests of the Archdiocese and seminarians.
Community leaders and leaders of other faiths as well as politicians and government representatives filled the pews.
The Apostolic Administrator for the Archdiocese, Bishop Peter Comensoli - who will remain in the position until a new Archbishop is announced by the Pope - said the mass for Sydney's eight Archbishop reflected everyone's deep appreciation for the Cardinal's faith, vision, generosity and untiring service.
Cardinal Pell leaves for Rome shortly to take up his role as Prefect of the new Secretariat for the Economy - a new position to oversee the management of Vatican finances.
After a week when the Royal Commission seemed to dominate the media, Cardinal Pell was among friends and well wishers.
During his homily he told the gathering it was a "bittersweet experience to move on from a job that you have loved".
However he said;"I go willingly and happily, well aware of at least some of the costs of parting and aware that I will be shedding one set of burdens but only for another."
Cardinal Pell told those gathered that before he was inducted as Archbishop of Sydney in 2001, he went to pray at the tomb of then-Blessed Mary MacKillop for the spiritual wellbeing of the Archdiocese.  He repeated that pilgrimage before his farewell Mass, asking the intercession of St Mary of the Cross for the continued blessing and strengthening of Catholic life in Sydney under the leadership of his successor.
Cardinal Pell said that a Bishop often wonders what the secrets of religious vitality are.  For us, he said, "the secret to our vitality lies in the person of Jesus Christ, in following His teachings, in recognising His redemptive activity, through putting into practice community building, through putting into practice that He achieved through miracles and that we can do now through ordinary, everyday science". 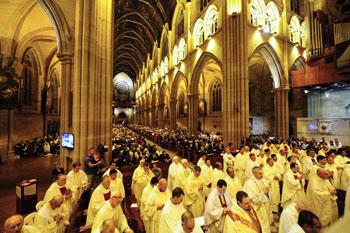 Thousands gathered in St Mary's Cathedral for Cardinal Pell's Thanksgiving and Farewell Mass
"What we are firstly on about is faith in Christ, faith in God, and the moral struggle."
On Pope Francis: "His teaching is Christ-centred, very basic, a call to conversion.  He believes in worship, the vertical dimension, adoration of the one true God."
"Our believing is not irrelevant for the rest of our lives.  Despite all of the differences between us, we will be united in our one, true faith."
Cardinal Pell's final words of the homily were; "May the Lord, our God, be with you, as He was with our ancestors.  May He never desert you or cast you off.  May He turn your hearts towards Him so that you may follow His ways and keep His commandments and laws and all the ordinances He gave to your ancestors.  And I make this prayer that your hearts may be fully and wholly with the Lord, our God, following His laws and keeping His commandments, as at this present day.  And may God bless you all.  God bless you and thank you for at least, from my point of view, a wonderful 13 years."
The Cathedral erupted in applause.
Following the Mass the priests and seminarians formed a "priestly guard of honour" as Cardinal Pell walked down the centre aisle of the Cathedral, again  to applause ,and then past the priests and seminarians and into the sacristy for the last time.
Leaving the Cathedral many people also commented on the magnificent music and song under the direction of Thomas Wilson. The Cardinal has always been an enthusiastic and encouraging supporter of the Cathedral music department.
All were invited to supper after the Mass in the Cathedral Hall however it took the Cardinal more than half an hour to walk the short distance - with music and singing he was constantly stopped by families and students who want to thank him and wish him well.
There were more blessings and photographs in the hall  and finally Cardinal Pell slipped away - perhaps to pack, at last.
SHARED FROM ARCHDIOCESE OF SYDNEY