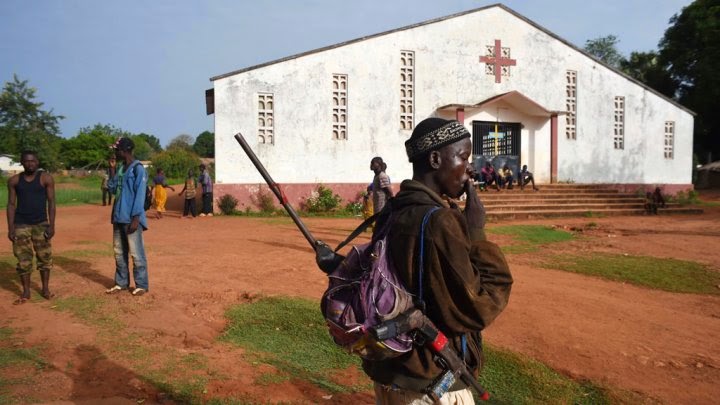 Agenzia Fides) – The perpetrators of the attack on Our Lady of Fatima parish church in Bangui, the capital of the Central African Republic, spoke neither French nor the locale Sango, Fides was told by Archbishop Dieudonné Nzapalainga, archbishop of Bangui, who added: “The attackers shouted in English ‘open the door’”.  (Image Share France24)
On 28 May men armed with automatic weapons and hand grenades attacked the parish where a number of persons had sought shelter from violence. The attack left 18 people dead including a Catholic priest Rev. Paul-Emile Nzale, aged 76. According to Fides sources at least 42 people were taken hostage and the bodies were later found. However Archbishop Nzapalainga cannot confirm the news. “Some survivors whom I met told me people were taken away, but on their whereabouts voices are contradictory: some say they were killed others affirm they are still alive” the Archbishop said.
The attack has increased tension in the capital. “The city is totally paralyzed. Demonstrators calling for the temporary government to resign were dispersed by the army. Tension is high and no one knows what is going to happen” concludes Mons. Nzapalainga.
According to Fides sources, the attack on Our Lady of Fatima parish was carried out by foreign jihadists who now have complete control of Muslims living in the Km 5 district of Bangui. “Although the authorities pretend not to notice, many Central Africans know that jihadists terrorists from Sudan and Nigeria have infiltrated into the Seleka and are now in the Km 5 district. Likening the anti balaka to Christians, the western media offered these criminals a perfect means of propaganda” our sources conclude. Bishop Nestor Desire Nongo-Aziagbia, Bishop of Bossangoa, had earlier told Fides Agency about the presence of foreign jihadists at km 5 (see Fides 28/4/2014).
Seleka is the rebel coalition which took power in Bangui in March 2013, throwing the country into chaos. The anti balaka militiamen who chased the Seleka from the capital turned into criminal gangs now rampant in various parts of Central Africa. (L.M.) (Agenzia Fides 30/5/2014