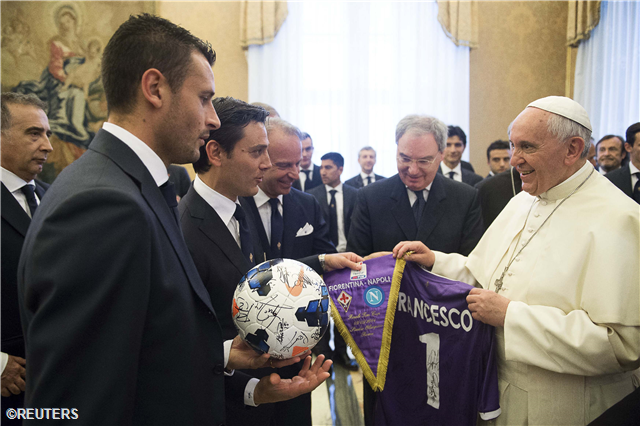 Pope Francis gave an address on Friday, May 2, 2014 to players of two Serie A Italian football teams, Fiorentina and Napoli, as well as to directors of Italy’s National Football Federation and the Serie A League. The Pope told the football players and directors that he has many wonderful memories of going to the local football stadium as a boy with members of his family.
VATICAN INFORMATION SERVICE REPORT:
“Football is a social entity, and requires social responsibility on the part of players, both on and off the pitch, and by national and local managers”, said Pope Francis this morning at the beginning of his address to the Fiorentina and Napoli football clubs, and a delegation from the Football Federation and the Serie A League. The Pope shared some “joyful moments” from his youth, when he used to visit the stadium with his family on Sundays, and commented that he would like football and every other popular sport to rediscover a celebratory dimension. “Today, even football is caught up in the world of business, advertising, television and so on”, he continued. “But the economic aspect must not prevail in sport, as it risks contaminating it all, at international, national and also local levels. It is therefore necessary to react positively from above, restoring sporting dignity to events”. The Pontiff reminded the footballers of the great responsibility inherent in being the focus of attention and role models to many young people: “bear this in mind, and consider that your behaviour is resonant, both positively and negatively. Always be true sportsmen!”. In conclusion, the Pope emphasised that sport has great educative value, for the growth of the person: personal growth, in the harmony of body and spirit, and social growth, in terms of solidarity, loyalty and respect. May football always enable the development of this potential!”. (VIS Release)