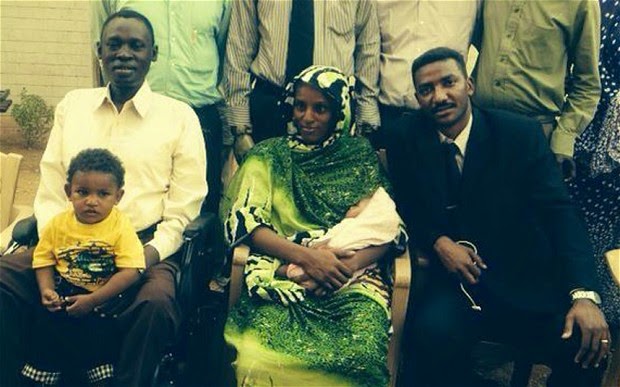 LATEST UPDATE Meriam and her husband are Charged by Sudan government for false documnents while trying to leave the Country. The whole family is now being held in prison. Meriam Ibrahim, the Sudanese Christian who was released from prison after courts cancelled her death sentence, was taken by government authorities at the Khartoum airport. Close to 40 security agents detained her along with her husband Daniel Wani (Pictured, left, who has MS) and their two children Martin (21 months) and Maya (1month). They were on their way to the US as Daniel is a US citizen. Meriam Ibrahim was arrested in February and sentenced to death in May on due to her refusal to renounce her Christian faith. However, Yesterday the Court of Appeals overturned her death sentence and she was released. She and her family are being held in an undisclosed location.  Earlier today News Channels reported her re-arrest but the Sudan Government has denied this.

PLEASE PRAY FOR THEIR RELEASE & SAFETY