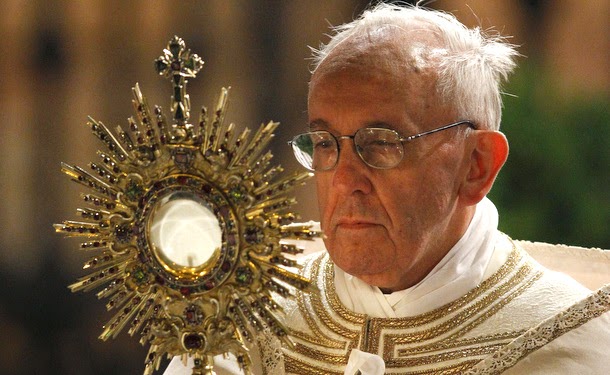 (Vatican Radio) Pope Francis celebrated Mass on the Feast of Corpus Christi, Thursday evening, in front of the main entrance to the Basilica of St. John Lateran..

He spoke to about 20,000 people, saying that the Eucharist is a “moment of true communion with the Lord, but also with my many brothers and sisters who share at this same altar?” He explained that in “adoring Christ truly present in the Eucharist, do I allow myself to be transformed by him?”
Pope Francis said: “Jesus speaks in the silence of the mystery of the Eucharist and reminds us each time that following him means going out of ourselves and making our lives not something we ‘possess,’ but a gift to him and to others.” “The Eucharist is the sacrament of the communion that takes us out of our individualism so that together we live our discipleship, our faith in him.”
The pope said he is “always struck” by the disciples asking Jesus to send the crowd away to find food and lodging and Jesus telling him, “give them some food yourselves.”
Pope Francis said: “In the face of the crowd’s needs, this is the disciples’ solution: Everyone takes care of himself; dismiss the crowd. Many times we Christians have that same temptation; we don’t take on the needs of others,but dismiss them with a compassionate ‘May God help you’ or a not-so-compassionate ‘Good luck.’”He continued: “It is a moment of profound communion: the crowd quenched by the word of the Lord is now nourished by his bread of life, and all had their fill.”
According to the Pope we should begin by “placing at God’s disposal what little we have, our humble abilities, because only in sharing and in giving will our lives be fruitful.”
Pope Francis said: “Once again this evening, Jesus gives himself to us in the Eucharist, shares our journey and, in fact, makes himself the food that sustains our lives, even when the road gets rough and obstacles slow our steps.”
At the same time, he said, in receiving the Eucharist faithfully “the Lord leads us to follow his path — that of service, sharing and giving; and that little that we have, the little that we are, if shared, becomes a treasure because the power of God, who is love, descends to our povert
After the Mass, Pope Francis led the candlelight Corpus Christi Procession on foot through the streets to the Basilica of St. Mary Major, a little over a mile away.

Anonymous said…
This is described so beautifully by Pope Francis. It made me think about the fact that Jesus had the loaves multiply and really Jesus can do everything so multiplying Himself over and over again to the whole world so that we can live in Him should not be so hard to believe. It is a life giving gift Jesus has given to us all. It is the Greatest of all miracles that Jesus has performed and given to us. How Jesus loves us. I feel Jesus calling me to Eucharist every day and I have been lazy, but forgive me Lord Jesus and don't give up on drawing me closer as I seek to know and love You more,My Jesus!
June 19, 2014 at 10:16 PM

Anonymous said…
As a relatively new Chatholic from long standing Presbyterian background, I found that Eucharist is an absolutely fasciating experience which really1) fill my body and soul with strong determination to follow Jesus and 2) bring me joyful tears. I wish to share it with other people around me as many as possible.
June 22, 2014 at 10:03 PM