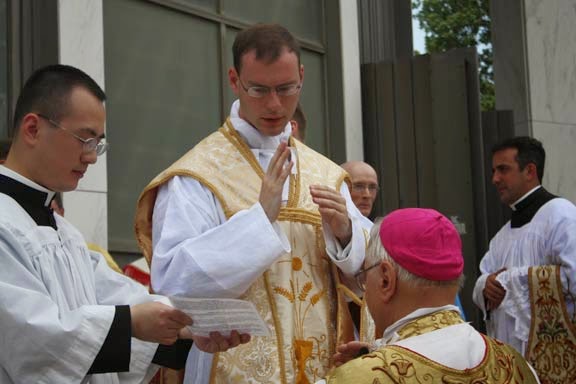 FSSP Release: Reading, 12 June 2014
Dear Confraternity Members,
Your prayers as members of our extended family through the Confraternity of St Peter are urgently needed. Last night in the U.S.A. the Fraternity Rectory in Phoenix was broken into. District Superior Fr. Eric Flood was contacted at 2am by the police who informed him that Fr. Kenneth Walker, FSSP had been killed and that Fr. Joseph Terra was in critical condition. The families of the two priests have been informed. (Pictured Below Fr. Walker (Left), Bishop Olmsted and Fr. Terra (Right)
Image source; http://www.phoenixlatinmass.com/


FSSP Update: Prayer intentions, letters and gifts of condolence, and memorials for Fr. Walker’s family may be sent via the community of St. John Vianney Chapel, in Maple Hill, Kansas:

Update: According to sources Fr. Terra gave Last Rites to Fr. Walker before he died. 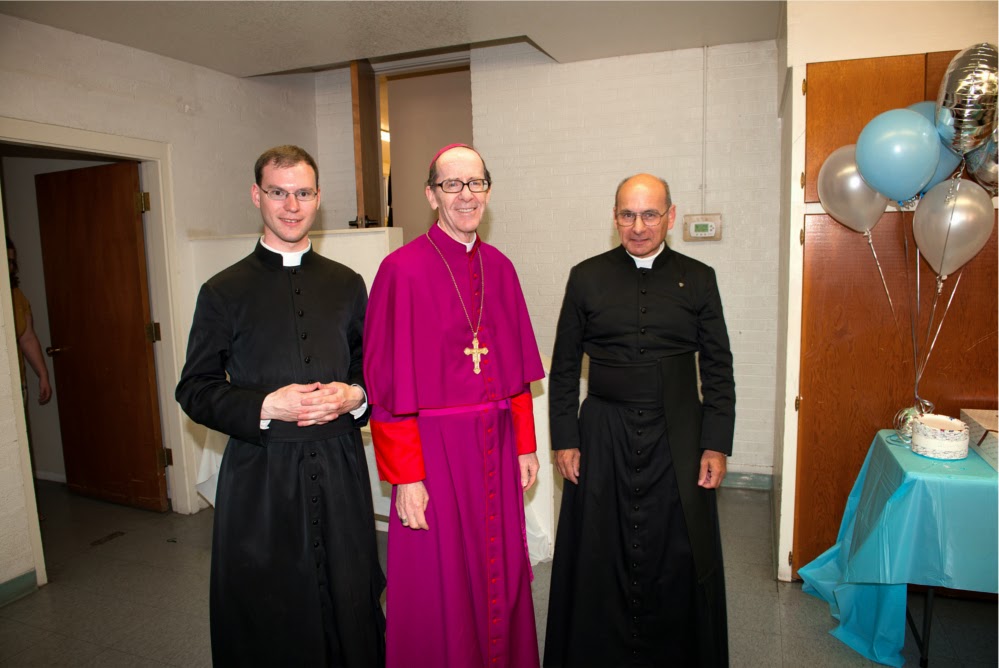 Fr Walker was 29 years and had been ordained a priest 2 years ago. Please offer your daily decade of the Rosary and the Confraternity Prayer today and in the coming days for the repose of the soul of this young priest and for the health of Fr. Terra, as well as for strength for their families and their parishioners in this tragedy.

The Archdiocese of Galveston-Houston biography of Walker


Fr. Kenneth Walker, FSSP was born in Upstate New York near Poughkeepsie, the middle of 11 children (6 boys and 5 girls). His family moved frequently when he was young. While his father was working construction in Wilmington, N.C, the family decided to build, with their own hands, a log cabin on some land they owned in nearby Tennessee. Their intention was to sell the home, but they changed their minds and moved in. While living there, they visited a used book store and found a book called The Incredible Catholic Mass. It described the Tridentine Mass, which they had never seen nor heard. The book was considered worthless and the storeowner gave it to them for free.

The family was intrigued. The more they learned about the Traditional Mass, the more they wanted it in their daily lives. On his own initiative, Fr. Walker began learning Latin. The family decided to sell their log cabin and move to rural Pennsylvania near Scranton where the Traditional Mass was offered. Fr. Walker eventually became an altar server at the FSSP Apostolate, and after attending Our Lady, Seat of Wisdom Academy in Ontario, entered the seminary.

He was ordained to the Sacred Priesthood in 2012, and currently serves as Assistant Pastor of Mater Misericordiae Mission, the FSSP Apostolate in Phoenix.
Fr. Kenneth Walker, a member of the Priestly Fraternity of Saint Peter, was ordained on May 19, 2012, with four other young men. They were ordained by His Excellency Bishop Fabian W. Bruskewitz in the beautiful Cathedral of the Risen Christ in Lincoln, Nebraska.

Fr. Kenneth Walker, pray for us.

Mother of Mercy Mission Catholic Church near 15th Avenue and Van Buren Street at around 9 p.m. Wednesday.
The victims have been identified as Father Kenneth Walker, 29, and Father Joseph Terra, 56.
Phoenix Police Sgt. Steve Martos said Terra called 911 from
Based on Terra's call, they believe this might have been a botched burglary.
Walker, who had just celebrated the second anniversary of his ordination, was shot and later died at the hospital. Terra, remains in critical but stable condition.
Police said the suspect or suspects also stole a vehicle from the church -- a 2003 Mazda Tribute with the Arizona license plate AYK1358. That car, which belonged to Walker, was discovered about two blocks from the church shortly after 11 p.m.
The suspect or suspects, who have yet to be identified, are still on the loose and considered dangerous.

Diocese of Phoenix statement
We are stunned and deeply saddened to learn of the tragic assault perpetrated last night against Fr. Joseph Terra and Fr. Kenneth Walker, two religious order priests who belong to the Priestly Fraternity of St. Peter.

The reported attack occurred at Mater Misericordiae Mission in Phoenix.

The police are still gathering information and trying to sort through the details of this senseless act of violence. We ask that people offer prayers for both priests, the religious community, their families and the parish.

Eternal rest, grant unto him O Lord and let perpetual light shine upon him. May he rest in peace. Amen.
VIDEO HOMILY BY FR. KENNETH WALKER
Posted by Jesus Caritas Est at 8:16 AM

May Father Walker RIP. Prayers are with him, family and church community.