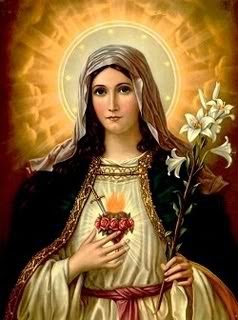 Memorial of the Immaculate Heart of the Blessed Virgin Mary
Lectionary: 376/573

The Lord has consumed without pity
all the dwellings of Jacob;
He has torn down in his anger
the fortresses of daughter Judah;
He has brought to the ground in dishonor
her king and her princes.

On the ground in silence sit
the old men of daughter Zion;
They strew dust on their heads
and gird themselves with sackcloth;
The maidens of Jerusalem
bow their heads to the ground.

Worn out from weeping are my eyes,
within me all is in ferment;
My gall is poured out on the ground
because of the downfall of the daughter of my people,
As child and infant faint away
in the open spaces of the town.

In vain they ask their mothers,
“Where is the grain?”
As they faint away like the wounded
in the streets of the city,
And breathe their last
in their mothers’ arms.

To what can I liken or compare you,
O daughter Jerusalem?
What example can I show you for your comfort,
virgin daughter Zion?
For great as the sea is your downfall;
who can heal you?

Your prophets had for you
false and specious visions;
They did not lay bare your guilt,
to avert your fate;
They beheld for you in vision
false and misleading portents.

Cry out to the Lord;
moan, O daughter Zion!
Let your tears flow like a torrent
day and night;
Let there be no respite for you,
no repose for your eyes.

Rise up, shrill in the night,
at the beginning of every watch;
Pour out your heart like water
in the presence of the Lord;
Lift up your hands to him
for the lives of your little ones
Who faint from hunger
at the corner of every street.

Each year Jesus’ parents went to Jerusalem for the feast of Passover,
and when he was twelve years old,
they went up according to festival custom.
After they had completed its days, as they were returning,
the boy Jesus remained behind in Jerusalem,
but his parents did not know it.
Thinking that he was in the caravan,
they journeyed for a day
and looked for him among their relatives and acquaintances,
but not finding him,
they returned to Jerusalem to look for him.
After three days they found him in the temple,
sitting in the midst of the teachers,
listening to them and asking them questions,
and all who heard him were astounded
at his understanding and his answers.
When his parents saw him,
they were astonished,
and his mother said to him,
“Son, why have you done this to us?
Your father and I have been looking for you with great anxiety.”
And he said to them,
“Why were you looking for me?
Did you not know that I must be in my Father’s house?”
But they did not understand what he said to them.
He went down with them and came to Nazareth,
and was obedient to them;
and his mother kept all these things in her heart.