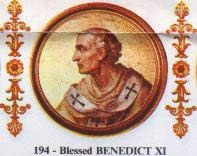 Pope Benedict XI (Latin: Benedictus XI; 1240 – 7 July 1304), born Nicola Boccasini, was Pope from 22 October 1303 to his death in 1304. Born in Treviso, he succeeded Pope Boniface VIII, but was unable to carry out his policies. Benedict XI was a Dominican and when he was made Master of the Order in 1296, he issued ordinances forbidding public questioning of the legitimacy of Boniface VIII's election on the part of any Dominican. At the time of the seizure of Pope Boniface VIII at Anagni in 1303, Boccasini was one of only two cardinals to defend the papal party in the Lateran Palace itself. However, upon being elected Pope at the papal conclave of 1303, he released King Philip IV of France from the excommunication that had been laid upon him by Boniface VIII, and practically ignored Boniface's bull Unam sanctam, which asserted papal supremacy over secular rulers. Nevertheless, on 7 June 1304, Benedict excommunicated Philip IV's implacable minister Guillaume de Nogaret and all the Italians who had played a part in the seizure of Boniface VIII at Anagni. After a brief pontificate of eight months, Benedict XI died suddenly at Perugia. As original reports had it, suspicion fell primarily on Nogaret with the suspicion that his sudden death was caused by poisoning. There is no direct evidence, however, to either support or disprove the contention that Nogaret poisoned the pope. Benedict XI's successor, Clement V removed the papal seat from Rome to Avignon, inaugurating the period sometimes known as the Babylonian Captivity. He and the French popes who succeeded him were completely under the influence of the kings of France. Benedict XI was the author of a volume of sermons and commentaries on the Gospel of Matthew, the Psalms, the Book of Job, and the Book of Revelation. (Wikipedia)