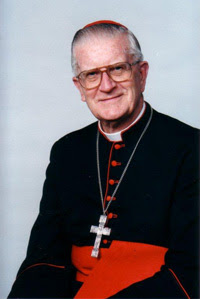 Statement on the Death of Cardinal Clancy, Archbishop Emeritus of Sydney

Cardinal Clancy was aged 90 and for the past eight years has been cared for by the Little Sisters of the Poor at Randwick.
Cardinal Clancy was the seventh Archbishop of Sydney from 1983 to 2001.
He was born in Lithgow NSW and from a very early age said he wanted to be a priest beginning his studies at age 16.
He was ordained to the priesthood in 1949 and continued his studies both in Australia and Rome. In 1974 he was ordained Auxiliary Bishop of Sydney.
In November 1978 Pope John Paul II appointed Bishop Clancy to the Archdiocese of Canberra-Goulburn as Archbishop until he returned to become the seventh Archbishop of Sydney in 1983 until his retirement in 2001, when he was succeeded by the then Archbishop of Melbourne, George Pell who now holds a position in Rome.
Bishop Peter A Comensoli, Apostolic Administrator of the Catholic Archdiocese of Sydney said:
"News of Cardinal Clancy's passing is received with great sadness. He was a great Churchman and a true leader with total dedication to his vocation. Cardinal Clancy made many contributions to the Australian Church and especially here in Sydney during a lifetime of service."
Funeral arrangements for Cardinal Clancy will be announced early this week.
For further details of Cardinal Clancy's life see  https://www.sydneycatholic.org/about/history/Clancy.shtml

POPE FRANCIS SENDS CONDOLENCES
(Vatican Radio) Pope Francis has sent a telegram of condolence over the death of Cardinal Edward Bede Clancy, Archbishop Emeritus of Sydney, Australia. The cardinal passed away on Sunday in Sydney at the age of 90. Below is the full text: To Monsignor Peter Comensoli Apostolic Administrator Archdiocese of Sydney I was saddened to learn of the death of Cardinal Edward Bede Clancy, Archbishop Emeritus of Sydney, and I offer my heartfelt condolences, together with the assurance of my prayers, to you and to all the faithful of the Archdiocese. I join you in commending the late Cardinal’s soul to God the Father of mercies, with gratitude for his years of episcopal ministry and his wise pastoral leadership of the Archdiocese of Sydney, as seen in his concern for the needs of the poor, his support for Catholic education and his broad ecumenical and civic vision. To all present at the Mass of Christian Burial and to all who mourn Cardinal Clancy in the hope of the Resurrection, I cordially impart my Apostolic Blessing as a pledge of strength and consolation in the Lord. FRANCISCUS PP.