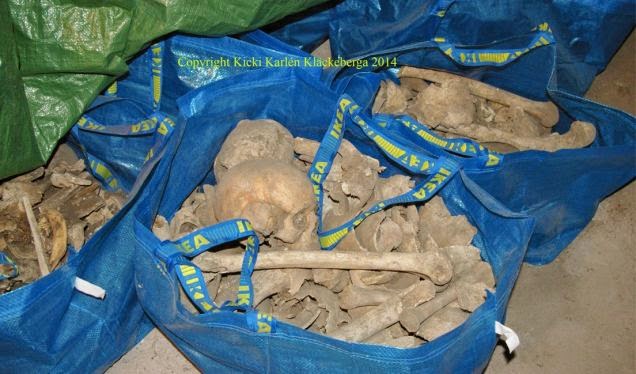 A woman in southern Sweden is furious after stumbling upon scores of skulls and human bones inside Ikea bags in a church. The man who dug up the bones, however, says it's not as bad as it looks.

For  Breaking News, Inspirational Stories, Novena Prayers, Mass Readings, and FREE Movies LIKE http://facebook.com/catholicnewsworld
The Kläckeberga church is using Ikea bags to store the remains of around 80 people who were once buried under the floorboards.
The macabre collection, which is almost overflowing from a set of large blue Ikea bags, was found by local woman Kicki Karlén.
"There were around 80 skeletons," she told The Local.
"And it made me very angry about how they were just sitting there. Some people at the parish told me the bones had been there since 2009."
The bags are covered by a tarpaulin and have been sitting there since parts of the church were dug up and rebuilt to allow wheelchair access.
"I was on the team called in to dig out the bones five years ago," archaeologist Ludvig Papmehl-Dufay told The Local.
"Our mission was to document and rebury the bones, which may be as much as 500 years old. But the reburial was delayed and I have no idea why. The plan was to rebury them as soon as possible, but that's up to the church. The county board said they couldn't leave church ground, and it became complicated."
He explained that the bones were likely reburied in a secondary deposition many years ago in what he called a "bone house". The collection is mostly skulls and longer bones, he added.
While Papmehl-Dufay denied storing the bones in the Ikea bags himself, he admitted that it sounded like an efficient storage technique.
"It's not standard practice, definitely not for archaeologists, but the Ikea bags aren't actually that bad. They'd be great for stopping the moulding process. But it can't be that good to have them in the basement for so long."
Karlén, meanwhile, took to her blog to lament the situation and to call for answers.
"How would you feel if it was your grandmother or grandfather?" she wrote.
Karlén, an erotic novelist, has since told The Local that she may write a book about the bones.  Shared from The Local Sweden
Oliver Gee (oliver.gee@thelocal.se)