In the Path of ISIS a Seminarian's Story from Iraq

In the Path of IS - a Seminarian's Story from Iraq 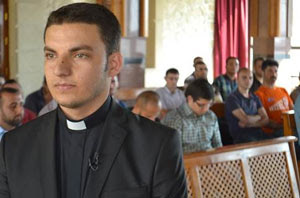 Martin Barni in the chapel of St Peter's seminary in Ankawa Erbil in Northern Iraq
Bombs fall and the sound of the explosion sends shock and fear into the hearts of the people. Amid the sound of crying and frenzied activity, people pack up what belongings they can carry and make off into the night. In the midst of it all stands Martin Baani, a 24-year-old seminarian.The realisation is dawning on him that this is Karamlesh's last stand.

For 1,800 years, Christianity has had a home in the hearts and minds of the people of this village, full of antiquity. Now that era is about to be brought to a calamitous end; Islamic State are advancing.
Martin's mobile phone rings: a friend stammers out the news that the nearby town of Telkaif has fallen to "Da'ash" - the Arabic name for Islamic State.  Karamlesh would surely be next.
Martin dashes out of his aunt's house, where he is staying, and heads for the nearby St Addai's Church. He takes the Blessed Sacrament, a bundle of official of papers and walks out of the church. Outside a car awaits - his parish priest, Fr Thabet, and three other priests are inside.
Martin gets in and the car speeds off. They leave Karamlesh and the last remnants of the village's Christian presence go with them.
Speaking to Martin in the calm of St Peter's Seminary, Ankawa, it is difficult to imagine he is describing anything except a bad dream.But there is nothing dreamy in Martin's expression. "Until the very last minute, the Pashmerga [the Kurdish armed forces protecting the villages] were telling us it was safe.
"But then we heard that they were setting up big guns on St Barbara's Hill [on the edge of the village] and we knew then the situation was very dangerous."
Taking stock of that terrible night of 6th/7th August, Martin's confidence is bolstered by the presence of 27 other seminarians at St Peter's, many with their own stories of escape from the clutches of the Islamic militants.
Martin and his fellow students for the priesthood know that the future is bleak as regards Christianity in Iraq.
A community of 1.5 million Christians before 2003 has dwindled to less than 300,000. And of those who remain, more than a third are displaced. Many, if not most, want a new life in a new country.
Martin, however, is not one of them. "I could easily go," he explains calmly. "My family now life in California. I already have been given a visa to go to America and visit them."
"But I want to stay. I don't want to run away from the problem."
Martin has already made the choice that marks out the priests who have decided to stay in Iraq; his vocation is to serve the people, come what may. The teachers and 28 seminarians (Chaldean and Syriac Catholic) in the chapel of St Peter's Seminary in Erbil
"We must stand up for our rights; we must not be afraid." He explains. Describing in detail the emergency relief work that has occupied so much of his time, it is plain to see that he feels his place is to be with the people.
Martin is already a sub-deacon. Now in his final year of theology, ordination to the priesthood is - God willing - but a few months away.
"Thank you for your prayers," says Martin, as I take my leave of him. "We count on your support."
Aid to the Church in Need is committed to supporting Martin and all the seminarians at St Peter's Seminary, Ankawa as they make their journey to the Altar of God and prepare to serve God and their suffering people as priests.

Directly under the Holy See, Aid to the Church in Need supports the faithful wherever they are persecuted, oppressed or in pastoral need. ACN is a Catholic charity - helping to bring Christ to the world through prayer, information and action.
The charity undertakes thousands of projects every year including providing transport for clergy and lay Church workers, construction of church buildings, funding for priests and nuns and help to train seminarians. Since the initiative's launch in 1979, Aid to the Church in Need's Child's Bible - God Speaks to his Children has been translated into 162 languages and 48 million copies have been distributed all over the world.
For more information or to make a donation to help the work of Aid to the Church in Need, please contact the Australian office of ACN on (02) 9679-1929. e-mail: info@aidtochurch.org or write to Aid to the Church in Need PO Box 7246 Baulkham Hills NSW 2153.
On Line donations can be made at www.aidtochurch.org
SHARED FROM ARCHDIOCESE OF SYDNEY