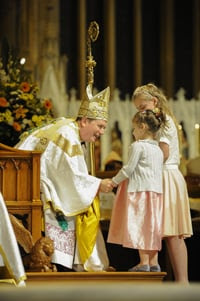 Joy & Warmth Amid the Pomp & Spectacle of the Installation of the Most Rev. Anthony Fisher OP 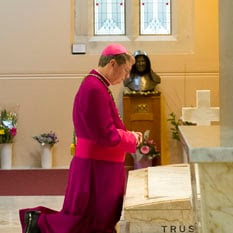 Prior to the Installation Mass, Archbishop Anthony travelled to North Sydney to pray beside the tomb of St Mary of the Cross MacKillop
From the moment he arrived at St Mary's Cathedral on Wednesday night to be installed as the ninth Archbishop of Sydney, the Most Rev Anthony Fisher OP was greeted with an outpouring of joy and affection.

The Cathedral was packed to capacity with dignitaries, political figures, religious, priests, seminarians, members of the Archdiocese of Sydney's many agencies and organisations, school children along with hundreds of parishioners as well as the general public.
Still others crowded into the Crypt to watch the Liturgical Reception and Mass of Installation on specially-erected wide screens and streamed live via xt3.com
The historic ceremony took place under the soaring vaulted ceilings and breathtaking beauty of St Mary's Cathedral with music by the internationally-acclaimed St Mary's Cathedral Choir and Scholars of St Mary's and the St Mary's brass ensemble and organists Oliver Brett, Michael Butterfield and Dominic Mowawad, all under the director of the Cathedral's Director of Music Thomas Wilson.
More than 40 of Australia's serving and retired Bishops and Archbishops were there along with Sydney's Eastern Orthodox clergy and leaders of other faiths and denominations including leaders of the Muslim and Jewish communities.
For his Installation Mass, the Archbishop chose the Mass of Our Lady Help of Christians, patron saint of Australia.
While the ceremony began with Vespers at 7.00pm and then the procession of seminarians, priests, bishops and the Apostolic Nuncio to Australia, Archbishop Paul Gallagher, the soon-to-be installed Archbishop was on the other side the Bridge, at North Sydney, praying at the tomb of St Mary of the Cross MacKillop, Australia's first saint.

Archbishop Anthony paused on arrival to acknowledge his family including his father Colin Fisher.
In the meantime special guests for the Installation Mass arrived including His Excellency, General David Hurley Governor of NSW; former Prime Minister John Howard; NSW Premier Mike Baird, Senator Concetta Fierravanti-Well representing the Prime Minister (returning to Australia for the G20); Senator Jacinta Collins representing the Federal Opposition and NSW Shadow Treasurer, Michael Daley.
And of course the new Archbishop's parents, siblings and other members of his family and friends.
By now it was simply standing room only but no-one seemed to mind.
The screens inside the Cathedral showed the arrival of the new Archbishop in College Street and being greeted by the Catholic School of Performing Arts choir with a song of welcome.
Passing an honour guard of papal knights at the top of the stairs to the Cathedral he was welcomed and acknowledged by long-time friend and Indigenous Elder Elsie Heiss. 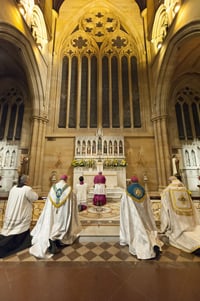 Archbishop Fisher prayed before vesting for the Mass in St Mary's Cathedral
The three-hour ceremony had begun. At times grand and traditional and at other times personal and informal, the tone was set by the Archbishop himself.
Pausing to acknowledge those he knew, he made his way down the central nave. There was a special moment when he embraced his parents, Colin and Gloria Fisher. Moving past the sanctuary and still warmly thanking those who came, he made his way to the Blessed Sacrament Chapel behind the main altar where he vested for the Rite of Installation.
He wore new vestments but the ring, pectoral cross and crozier were those that had belonged to the first Metropolitan Archbishop of Sydney, John Bede Polding of the Benedictine order who served Sydney between 1842 and 1877. The ninth Metropolitan Archbishop is a Dominican who carries a great love and understanding for history and tradition as well as the issues and challenges facing the Church today.
After greeting the rows of seminarians he made his way to the sanctuary, before greeting the gathering of well over 2500 people.
The Apostolic Nuncio read out in Latin the Papal Bull appointing  the Most Reverend Anthony Fisher OP DD Metropolitan Archbishop of Sydney. Fortunately for most the Chancellor of the Archdiocese, Monsignor John Usher read out an English translation. The Nuncio escorted the new Archbishop to the cathedra or Chair of Office of the Archbishop of Sydney.
Now it was official.
Various people from agencies of the Archdiocese, civic and community leaders, young families came forward to personally welcome the Archbishop. Relaxed and engaging the new Archbishop was getting off to a good start.
During the homily Archbishop Anthony spoke of the past, the present and his vision for the future. 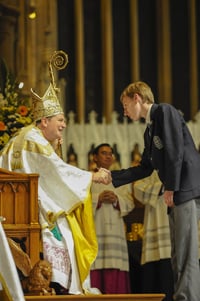 Representatives from schools and agencies across the Archdiocese came forward to personally welcome Sydney's new Archbishop
"Tonight I promise to devote myself to supporting marriage and family at a time when this crucial institution is much misunderstood and under such pressure. I am the first Archbishop lucky enough to have both parents present at his Installation, and I thank God for the love and support of Colin and Gloria these 55-years-past," he said. "It was their domestic church that first I heard the Gospel of life and love. With all my heart I thank them, my siblings and the rest of my family and friends for loving me so well."
Prior to the installation Archbishop Anthony said he was quite daunted and at times intimidated by his new ministry, its demands and expectations.
"As a young cleric in Sydney and Melbourne in Cardinal Clancy's time, I never guessed I would one day stand on the shoulders of those great men, all the way back to Polding," he said paid tribute to the recently-deceased Cardinal Clancy as well as to Cardinal George Pell with whom he worked closely for seven years as Auxiliary Bishop for the Archdiocese.
Before his appointment to Rome in March this year, he said Cardinal Pell achieved "so much in education, chaplaincies and seminaries, in centres for formation, retreat and pilgrimage, and through the Sydney World Youth Day, with which I was privileged to be associated."
To the amusement of all those present, Archbishop Anthony who is the first Dominican to become Archbishop of Sydney, related the story of St Albert the Great, the 13th Century Dominican theologian and scholar who became the Catholic Bishop of Regensburg, Germany.
"My order was founded eight centuries ago for "preaching and the salvation of souls," he said, explaining that the early friars were "rather ambivalent. About their own becoming bishops and on the episcopal appointment of St Albert the Great, the (then) Master of the Dominicans, Humbert of Romans wrote:"Ï would rather you were dead than a bishop....However troublesome you find the brethren, don't imagine things will be better once you have secular clergy and powers to deal with...Better to lie in a coffin than sit in a bishop's chair!"

Archbishop Anthony with two youngsters who came forward to welcome him
Archbishop Anthony then cited Ephesians 4:1-16) quoting St Paul whom he said anticipated and answered Humbert by "reminding us that Christ graces some to be apostles or evangelists, others to be pastors or teachers - but all speaking the truth in love and so building up the Church"

"The responsibility of a pastor is a grave one in any age but in our time has been aggravated by the shameful deeds of some clergy and some serious failures of some leaders to respond. I have personally found it harrowing as a bishop to listen to survivors tell me their stories, to hear how abandoned they felt and how they continue to suffer," he said. "To all survivors of abuse and all affected I say: the Church is - I am - profoundly sorry for what happened. Young people should be cherished and protected. The Church can do better and I am committed to giving a lead in this area."
Looking ahead he speculated on what the Archdiocese might look like when - God willing - he retires in 2035.
"My hope is for a Church in which the Gospel is preached with joy, the wisdom of our tradition mined with fidelity, the sacraments celebrated with dignity and welcome, and the seminaries, convents and youth groups teaming with new life; a Church in which parishes, chaplaincies and educational institutions are true centres of the new evangelisation, our laity theologically literate and spiritually well-formed, our outreach to the needy effective and growing, and God glorified above all."
Calling on the young people of Sydney, for whom he says he has special affection, Archbishop Anthony urged them to open their hearts to the adventure of the Gospel.
"I am depending on you to lend me all your energy and idealism. Never buy lies that nothing is true, all is relative, your ideals are illusory, your good works in vain. With God on your side, my young friends, who can be against you," he said. 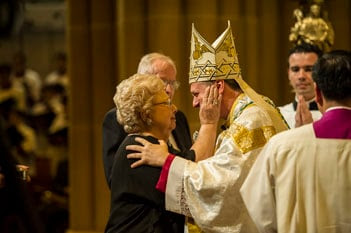 Archbishop Anthony embraces his mother Gloria Fisher when receiving the gifts of bread and wine to be used
in the Eucharist
Recalling his days at Riverview and Sydney University, when Cardinal Clancy had washed his feet one Holy Thursday night, Archbishop Anthony said he never dreamt he'd one day be "washing the feet here" and that this was a reminder that "I am to serve and not be served."

Born and bred in Sydney he said he had lived and worked in the South West of Sydney, the Lower North Shore, the Upper North, the Inner city and the East and most recently in the West of "this great city."
''What a joy to return in this new way," he said.
"Pope Francis says pastors should smell of their sheep. This is not a comment upon clerical hygiene but it is an insistence that we are from and for our flocks. Pray therefore, that I will always be a shepherd for Sydney after the heart of Jesus Christ."
For Archbishop's complete homily go tohttp://sydneycatholic.org/people/archbishop/homilies/
The Installation Mass can be watched on demand at www.xt3.com/installation.
Photos by Giovanni Portelli and Steve Turner
Posted by Jesus Caritas Est at 4:09 PM