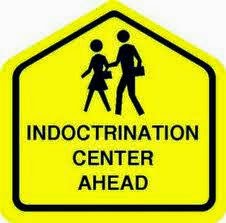 Special to JCE CatholicNewsWorld by Scott Ventureyra:
On Anti-Religious Indoctrination
Throughout academia there are many thoughtful educators. There are also those who have agendas to indoctrinate their students through uncritically accepting and adopting their personal philosophies.
Anti-Religious Indoctrination
Indoctrination is defined as: “to instruct in a doctrine, principle, ideology, etc., especially to imbue with a specific partisan or biased belief or point of view.” This definition serves well for understanding anti-religious indoctrination - the presentation of ideologies that are set to challenge traditional theistic thought and values, even when couched in seemingly neutral and subtle ways.
There is an inherent assumption in modern Western society that people who believe in God are irrational.  Popular culture is suffused with anti-religious material whether it is through newspapers, TV shows, documentaries, out- spoken celebrities or popular books. Nevertheless, it should be pointed out that there are many good reasons to believe in God’s existence.  Many modern versions of arguments for God’s existence are defended by highly intelligent Christian philosophers and theologians.  Much of this argumentation provides a convincing explanation for the following phenomena: the origin of the universe, the existence of the universe, the origin of the laws and constants of physics, the origin of consciousness, the existence of objective morality, the correspondence of our minds to understand reality in an accurate way which permits scientific study and the historicity of the resurrection of Jesus.  It is worth pointing out that one can be rationally justified (a natural intuitive belief known as properly basic) in believing in God and trusting in Him wholly apart from arguments but the beauty is that these arguments back up Christian beliefs.
There also exists the postulation that people who question naturalistic evolution (a view that excludes God from intervening in His Creation or sustaining it) are irrational.  A great deal of intelligent individuals including scientists believe that either God directly intervened or was somehow involved in the process of biological evolution.  This could encompass a variety of positions comprising Young Earth Creationism, Old Earth Creationism, Intelligent Design, and Theistic Evolution (either planned or guided).  Nonetheless, to suggest evolution is purposeless or unguided are metaphysical claims and not scientific ones.  The empirical science behind evolutionary theory cannot on its own answer questions of value and meaning unless coupled with a particular philosophy whether it be naturalistic, deistic, theistic, pantheistic etc… Nonetheless, the irrationality associated with questioning naturalistic evolution has permeated popular culture.
Treating questions about certain issues respectfully is good pedagogy whereas stifling questions through intimidation and appeals to authority is a form of indoctrination.  This is what is occurring throughout North America from the starting point of our education systems (e.g., kindergarten) to the graduate level (PhD).

Examples of Anti-Religious Indoctrination
Anti-religious indoctrination is beginning at earliest levels of North American educational systems; at the elementary school and even kindergarten levels. The GLBT (gay, lesbian, bi-sexual and transgendered) activists have made some serious advances in the public school systems in an attempt to challenge and transform traditional theistic morality on such issues.  Old Testament scholar, Michael Brown indicates that: “Pro-gay books are being read in elementary school classrooms, teachers are being mandated to use gender neutral language, gay activists have been welcomed in the White House, and young evangelicals see no problem with same-sex marriage.”[i]  The inroads have been made into mainstream culture and are being deeply absorbed into the educational system where by kindergarten students are being taught terms such as gender queer and queer theology.  There has also been a dramatic increase in the use of pro-gay books in elementary school classrooms including titles such as: Two Daddies and Me; Oh The Things Mommies Do!: What Can Be Better Than Having Two?[ii]
Another form of anti-religious indoctrination involves the conflation of the philosophical interpretation of scientific theories with scientific methodology.  In more technical terms, the conflation between metaphysical naturalism with methodological naturalism. Evolutionary biologists of the highest rank such as Stephen J. Gould, Richard Dawkins, Jacques Monod and George Gaylord Simpson have been guilty of this when they have declared that humanity’s purpose is illusory from their personal interpretations of evolutionary biology.
A commonly associated mantra includes the regurgitation that the ultimate purpose of life is to pass on our genes. Such a naturalistically rooted sentiment is repeated at all levels of education.  Typically it seems to be repeated in high school and university classrooms, particularly in biology classes by secular educators.
Its contemporary formulation can be found in Richard Dawkins’ book The Selfish Gene. Dawkins’ contention in his book is that an organism merely acts as a vehicle to copy genes to subsequent generations via a Darwinian selection process. It is a gene centric view; everything must ultimately bow down to the transferring of genetic information.  Obviously, this in and of itself says nothing about the meaning or purpose of life.  Dawkins himself seems to contradict this view in chapter 11: “We are built as gene machines and cultured as meme machines, but we have the power to turn against our own creators.  We, alone on earth, can rebel against the tyranny of the selfish replicators.”[iii] This flies in the face of genetic determinism that many proponents of Neo-Darwinism adhere to.
A third form of anti-religious indoctrination includes the denial of truth.  This is common at the university level.  The remnants of the “death of God movement” are still rearing their ugly heads in faculties of theology. When you couple this with postmodern epistemology, a number of professors of theology have made declarative statements akin to “there is no truth.”  Anyone who understands anything about logic will realize that such a claim is literally self-refuting since it contradicts what it sets to establish, i.e., it unwittingly claims there is a truth; through the affirmation that there is none. Perhaps it isn’t coincidental that such professors may not last too long in faculties of traditional Christian theology.  Who knows what such theologians truly believe.
The concept of truth is fundamental to theological reflection. The removal of it places the act of analyzing truth claims associated with the Christian faith (or any faith for that matter) on the same level as deciding which McDonald’s meal you prefer.
Such agendas are made clear when such professors subsequently speak of the resurrection of Jesus, as not being any “less real” if it had been solely experienced in the minds of the disciples as opposed to something that had objectively happened to Jesus.  This position is clearly rooted in Kierkegaardian existentialism. Kierkegaard expounded a form of fideism whereby experience was elevated over reason.  Kierkegaard went much too far with his emphasis on the experiential dimension while attempting to eradicate the rational element of the faith.  Nevertheless, faith and reason are more intimately involved than that and neither should be compromised over the other. Traditionally the two have operated harmoniously. PART 2 - http://jceworld.blogspot.com/2014/12/how-to-recognize-and-counteract-anti.html

by: Scott Ventureyra is a doctoral candidate in theology at Dominican University College in Ottawa, Canada.