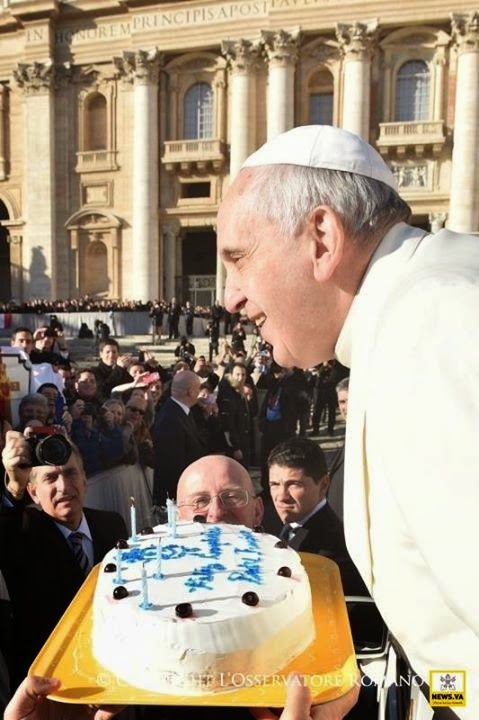 TODAY IS POPE FRANCIS BIRTHDAY.  He turns 78 today December 17, 2014. He was born in Flores, Buenos Aires, Argentina in South America. Francis was named Jorge Mario Bergoglio by his parents. He was born on December 17, 1936. He became the 266th Pontiff of the Roman Catholic Church on March 13,  2012. The Pontiff was ordained a priest in 1969. Jorge was the oldest of 5 children to Mario and Regina of Italy.
PRAYER FOR THE POPE:
Let us pray for our Pontiff Francis.
May the Lord preserve him, and give him life, and make him blessed upon the earth, and deliver him not up to the will of his enemies.
Let us pray.
O God, Shepherd and Ruler of all Thy faithful, look mercifully upon Thy servant Francis, whom Thou hast chosen as shepherd to preside over Thy Church: grant him, we beseech Thee, that, by word and example, he may edify those over whom he hath charge, so that together with the flock committed to him, he may attain everlasting life. Through Christ, our Lord. Amen.
nn

(Vatican Radio) There was a festive atmosphere at the weekly General Audience on Wednesday, as Pope Francis celebrated his 78th birthday.
As he made his way through the crowds, Pope Francis stopped by a group of seminarians from the Legion of Christ, who offered him a birthday cake, complete with lighted candles. The Holy Father also took the opportunity to take a sip of maté, a traditional Argentinian drink, offered my pilgrims at the Audience. On the Via della Conciliazione, which leads up to St Peter's Square, tango enthusiasts danced in the street to celebrate the Pope's birthday.
Among those sending birthday greetings from around the world was Cardinal Vincent Nichols of Westminster. "I would like to sing happy birthday for him," the Cardinal said. "And if I could, I’d join in the dancing in St Peter’s Square that I believe is taking place this morning."
Cardinal Nichols said the Catholic community in England and Wales wants "to wish Pope Francis a very, very happy birthday. We want to wish him every health and blessing, and we want to thank him for all this remarkable leadership that he’s giving." Pope Francis didn’t mention his birthday during the audience, but his reflections on the importance of simple, humble family life, lived on the peripheries, was certainly appropriate for the occasion.
Vatican Radio joins Catholics and well-wishers from around the world in wishing Pope Francis a very happy birthday. Ad multos annos!
A prayer for the Pope:
V. Let us pray for Francis, the Pope.
R. May the Lord preserve him, give him a long life, make him blessed upon the earth, and may the Lord not hand him over to the power of his enemies.
V. May your hand be upon your holy servant.
R. And upon your son whom you have anointed.
Let us pray. O God, the Pastor and Ruler of all the faithful, look down, in your mercy, upon your servant, Francis, whom you have appointed to preside over your Church; and grant, we beseech you, that both by word and example, he may edify all those under his charge; so that, with the flock entrusted to him, he may arrive at length unto life everlasting. Through Christ our Lord. R. Amen.