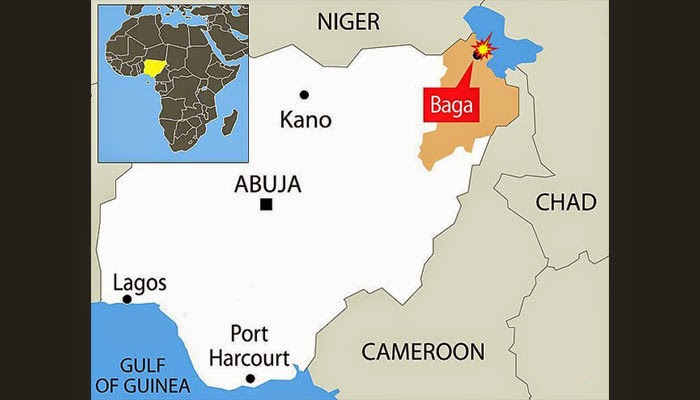 For the second time in five days, the Boko Haram insurgents have launched another attack on Baga town in Borno State, it was gathered yesterday; this time burning down almost all the buildings in the town.
In the attack of last Sunday, the military base was routed by the insurgents leading to soldiers abandoning newly acquired military weapons.
Speaking to journalists in Maiduguri, Abba Yunus, a member of the youth vigilante group in the town said: "The militant which had on Saturday taken over the military base in the town, as if they were not satisfied with their destruction of the town on Wednesday launched another attack on it."
Yunus claimed that the new set of people fleeing the town "told the members of the youth vigilante yesterday morning that the insurgents attacked the town again and torched houses and killed countless civilians who were helpless."
He said: "We were told by those that had to flee into Maiduguri through the bushes that many corpses were on the streets, many of which have started decomposing."
A man who identified himself as Musa Alhaji Bukar, a senior government official, had told the BBC that Boko Haram fighters burnt down almost the entire town on Wednesday, after over-running a military base on Saturday. Bukar said bodies lay strewn on Baga's streets, amid fears that some 2,000 people had been killed in the raids, he added. Earlier on Monday, Senator Maina Maaji Lawan, representing Borno North at the Senate said Boko Haram controlled 70 per cent of Borno State, which is worst-affected by the insurgency.
Bukar also said that fleeing residents told him that the town, which had a population of about 10,000, was now "virtually non-existent". However, the federal government has said that it is working hard to ensure the full liberation of Baga town and neighbouring communities. Coordinator of the National Information Centre (NIC) and Director General of National Orientation Agency ( NOA), Mr. Mike Omeri, stated this while briefing journalists yesterday in Abuja.
He also said that government was reviewing the situation with regards to the fight against insurgency in order to improve logistics requirement and support for the security forces to enable the defeat of the terrorists. He said officers were being trained and re-trained to up-grade their skills and capacity while increased surveillance, intelligence sharing and synergy are being enhanced.
According to him, consultation with security chiefs (serving and retired), traditional rulers and other critical stakeholders with a view to bringing their varied experiences to bear on the fight against the insurgency are on-going. Omeri tasked Nigerian leaders on patriotism, saying they do not have to wait until they get into government before they can contribute towards saving the lives of citizens.
"We want to encourage well-meaning leaders to emulate friendly countries who have thrown their weight behind Nigeria in this fight. The part of patriotism and honour is not to wait until we get into government before we can contribute to save the precious lives of our citizens," he said.
All Africa Report