#PopeFrancis "God’s Word is inconvenient when you have a stone heart...." 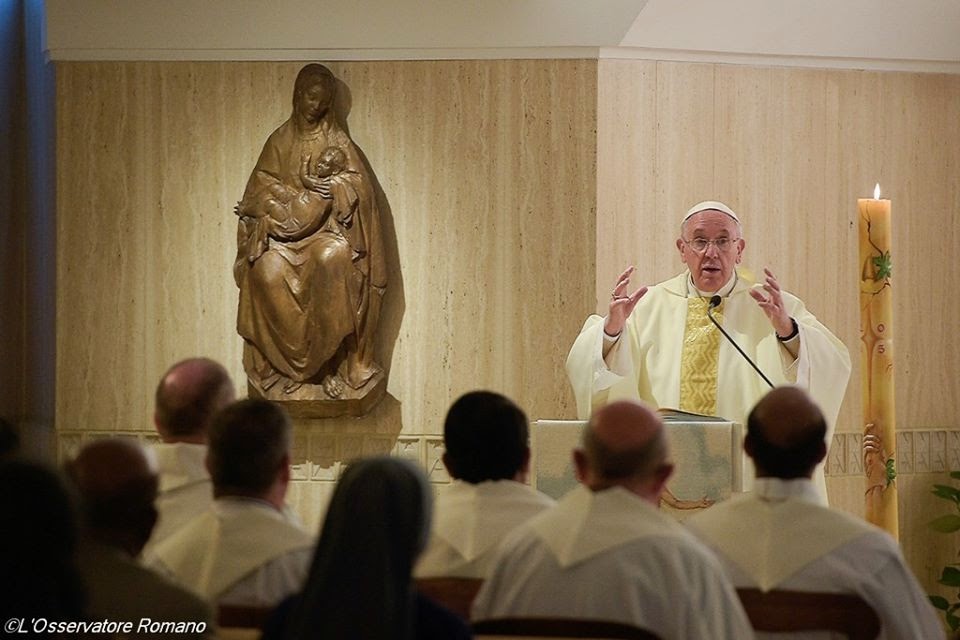 (Vatican Radio) Pope Francis today said that “ours is a Church of martyrs”. Speaking during morning Mass at Casa Santa Marta the Pope recalled the many Christians who are currently being persecuted and killed for their faith.
Drawing inspiration from the First Reading of the Act of the Apostles which tells of the stoning and martyrdom of Stephen, the first Christian martyr, the Pope remembered “our brothers whose throats have been slit on the beaches of Libya”, he spoke of “the young boy who was burnt alive by his companions because he was Christian”, he recalled “the migrants who were thrown from their boat into open sea” because, they too, were Christians.
Martyrs – Pope Francis said – do not need “other bread”, their only bread is Jesus, and Stephen – he explained – did not have the need to negotiate or find a compromise with those who put him to death. And reflecting on the reading the Pope pointed out that Stephen’s witness was such that his persecutors ‘covered their ears and rushed upon him together.’
Just like Jesus – he explained – Stephen had to deal with false witnesses and the anger of the people. Stephen – he said – reminded the elders and the scribes that their ancestors had persecuted other prophets for having been true to God’s Word, and when he described his vision of the heavens opening “and the Son of Man standing at the right hand of God” they did not want to listen but threw him out of the city and began to stone him:
“God’s Word is always rejected by some. God’s Word is inconvenient when you have a stone heart, when you have a pagan heart, because God’s Word asks you to go ahead trying to satisfy your hunger with the bread which Jesus spoke of. In the history of the Revelation many martyrs have been killed for their faith and loyalty towards God’s Word, God’s Truth”.
Pope Francis continued comparing the martyrdom of Stephen to that of Jesus: he too “died with that Christian magnanimity of forgiveness, praying for his enemies’.
And those who persecuted the prophets - the Pope pointed out – believed they were giving glory to God; they thought they were being true to God’s doctrine.
“Today – the Pope said – I would like to remember that the true history of the Church is that of the Saints and the martyrs,” of so many who were persecuted and killed by those who thought they possessed the ‘truth’- whose heart was corrupted by ‘truth’:
“In these days how many Stephens there are in the world! Let us think of our brothers whose throats were slit on the beach in Libya; let’s think of the young boy who was burnt alive by his companions because he was a Christian; let us think of those migrants thrown from their boat into the open sea by other migrants because they were Christians; let us think – just the day before yesterday – of those Ethiopians assassinated because they were Christians… and of many others. Many others of whom we do not even know and who are suffering in jails because they are Christians… The Church today is a Church of martyrs: they suffer, they give their lives and we receive the blessing of God for their witness”. The Pope also pointed out that there are also many “hidden martyrs: those men and women who are faithful to the voice of the Spirit and who are searching for new ways and paths to help their brothers better love God”.
He said they are often viewed with suspicion, vilified and persecuted by so many modern ‘Sanhedrins’ who think they are the possessors of truth. (Linda Bordoni)