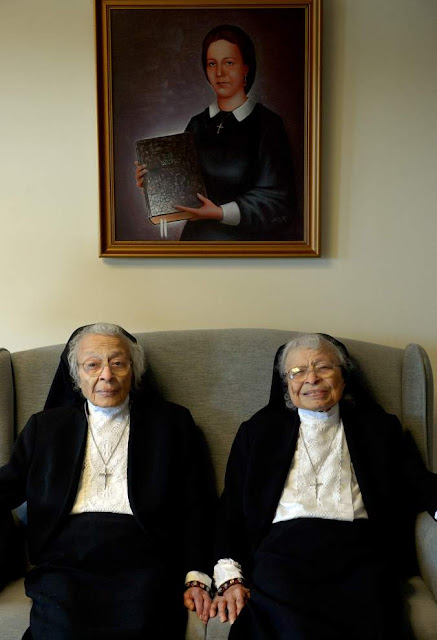 Sister Canice Lastrapes, SSF, and Sister Canisius Lastrapes, SSF, are twins and belong to the Sisters of the Holy Family order. They celebrated their 75th year as nuns. A portrait of the order's founder, Henriette Delille, hangs on the wall above them Friday, June 19, 2015. Advocate staff photo by JOHN McCUSKER --Ninety-three-year-old identical twins, Sisters Canice and Canisius Lastrapes of the Sisters of the Holy Family seemed born to their destiny.  Growing up in Opelousas, the youngest of 12 children and they say they’ve never had a second of regret. Seventy-five family members came from around the country to the order’s motherhouse on Chef Menteur Highway. “They’ve just been an enormous inspiration to so many people over the years,” said Jude Lastrapes, a great-nephew. “All you have to do is look at them and you see so much love and energy. … It’s like they were born to be nuns.” Born in Arnaudville, the twins grew up in Opelousas, where they were taught by nuns from kindergarten to high school, Sister Canice said. “We had sisters in our lives all along the way,” she said. “They were always so nice. It was just natural, I guess, that we would want to be like them.”  Sister Canice took her vows in September 1940 at the “old motherhouse” of the Holy Family order at 717 Orleans Ave then her twin sister Canisius made her final vows two months later.   “If I have one regret, it’s that it’s gone by so fast,” said Sister Canice. “That’s what happens when you love what you do. It has seemed like 75 days. When you don’t like what you’re doing, times does not seem to move at all.” To be sure, the twin sisters loved teaching and working with the poor. “I taught mostly chemistry and I took care of babies,” Sister Canice said, mostly teaching in Louisiana. “I spent a little time in Texas,” Sister Canice said, but not long. And even when the two sisters were separated, they stayed in touch. “We would be in contact with one another most of the time,” Sister Canisius said. They talk alike, they look alike. “They even dress alike … black and white habits,”. The Sisters Lastrapes returned together to the Holy Family order’s motherhouse on Chef Highway into which they moved in 1955. In December, the sisters moved into the order’s nursing home, the Lafon Nursing Facility. They love to sew and knit: “Things for anybody who needed or wanted them,” Sister Canice said. “You know what they say about idle hands,” she said. “Got to stay active.” Before the move, they tended a beautiful garden at the motherhouse, and picked up refuse around the grounds. “This is one of their big concerns,” said Sister Greta Jupiter, SSF, the congregational leader. “We feed the poor. A lot of people come to the door for food, and in the course of walking back to the highway, they drop plastic utensils and Styrofoam containers.  “I think some people were just not used to using a giant trash can and they threw things on the ground and pushed it under the bushes. That means when we’d go to clean up, we’d have to get down on our hands and knees and crawl under the bushes to pick up the paper.” Spending time with visitors recently in the lobby of the nursing home, Sister Rosalind Barbeneaux, SSF, cracked open a story about the nuns’ “Great Escape” from Hurricane Katrina. Sister Canisius knew what was coming and her face lit up in a smile. “The state troopers came to evacuate everybody, but Sister Canisius wouldn’t go without her dog, named Precious, and a parrot named Juana,” Sister Greta said. “That parrot couldn’t speak,” Sister Canice said. “But she understood. We used to speak to her like a little person … and she understood.” Confronted by the determined Sister Canisius, the state troopers had no choice but to make room for Precious and Juana when they evacuated the sisters. “They put them on a plane and flew them to El Paso,” Sister Rosalind said. “Once there, we had to go get them. And the mayor of El Paso heard we were looking for them, so he went personally to get them.” Eventually, the sisters returned to the motherhouse, where they lived in trailers for a while as the devastated complex was rebuilt. In time, Katrina became a bad memory, and Precious and Juana passed away and were buried on the motherhouse grounds. The clock ticked on, and the identical twin sisters sewed and knitted and cleaned the grounds and remembered the days of long ago, of Holy Ghost School in Opelousas, and all the other nuns and religious. “Sisters Canisius and Canice are my great-aunts,” Sister Rosalind said. While she is not related to Sisters Canice and Canisius by blood, she is related by marriage. “They influenced me to follow in their paths long, long ago,” she said. “Staying active,” Sister Canice said, as though that phrase is the capper for any life well lived. “That’s the key to it all. Staying active.” And, as a parting gift, all those kinfolk from around the country pledged a $20,000 scholarship endowment to St. Mary’s Academy in the name of Sisters Canice and Canisius.
Edited from Theneworleansadvocate - Photo share from John McCusker
Posted by Jesus Caritas Est at 2:39 PM