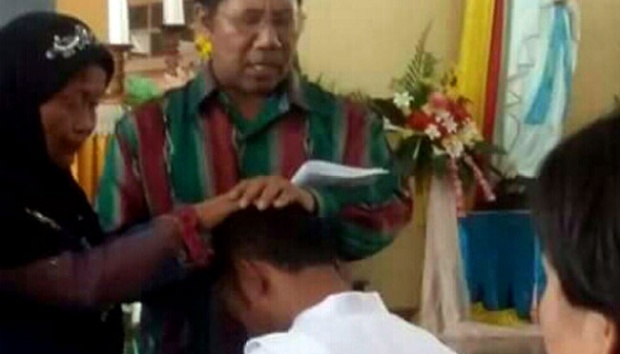 Siti Asiyah, a Muslim mother, accepted his son, Robertus B Asiyanto, to be inaugurated as a priest in Ledalero Maumere, October 10, 2015. Image: katolikkita.com
TEMPO.CO, Jakarta - Robertus Belarminus Asiyanto, 31, was one of the 11 newly ordained priests from SVD (Societas Verbi Divini) order. He received his priestly ordonation on October 10, at St. Paul Ledalero Seminary, Maumere, Flores, East Nusa Tenggara. Yanto, so he is called, is a new internet sensation, as a picture of his ordination surfaced in public. Yanto was accompanied by his mother, Siti Asiyah, notably a Muslim.
Previously, Father Hubertus Tenga SVD, Mission Secretary of SVD Ende Province had posted a picture of the priestly ordonation in his Facebook account. He then received a number of feedbacks from both foreign and national media, in light of Asiyanto’s ordonation.
“Amid massive religious clash around the globe, Mama Asiyah serves as a real example of inter-religious action,” he said.
“She is a remarkable mother. She raised her son and gave him freedom to become a priest,” said Father Leo Kleden, Superior Provincial of SVD Ende Province. “Everyone applauded Siti Asiyah, who was in tears as she witnessed her son’s ordination.” Siti Asiyah was a transmigrant from Java. She gave birth to Asiyanto in Flores, before having left by her husband at some point of her life. Asiyanto spent her early childhood in Catholic neighborhood. "He has been a Catholic since he was a kid, probably since he was in primary school," said Leo. Asiyanto then proceeded to seminary education and decided to become a priest.
Prior to the priestly ordonation, Asiyanto asked his mother for a permission. "Follow your heart," said his mother, as cited by Father Leo. Shared from TempoCoAGUSTINA WIDIARSI | REZKI ALVIONITASARI