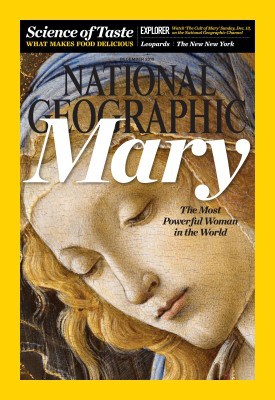 The latest cover of National Geographic Magazine calls the Blessed Virgin Mary “The World’s Most Powerful Woman”. Following this is an article about Mary the Mother of Jesus and her apparitions: PRAYING FOR THE VIRGIN MARY’S intercession and being devoted to her are a global phenomenon. The notion of Mary as intercessor with Jesus begins with the miracle of the wine at the wedding at Cana, when, according to the Gospel of John, she tells him, “They have no wine,” thus prompting his first miracle. It was in A.D. 431, at the Third Ecumenical Council, in Ephesus, that she was officially named Theotokos, Bearer of God. Since then no other woman has been as exalted as Mary. As a universal symbol of maternal love, as well as of suffering and sacrifice, Mary is often the touchstone of our longing for meaning, a more accessible link to the supernatural than formal church teachings. Her mantle offers both security and protection. Pope Francis, when once asked what Mary meant to him, answered, “She is my mamá.”
Her reported appearances, visions experienced often by very poor children living in remote or conflict-wracked areas, have intensified her mystery and aura. And when the children can’t be shaken from their stories—especially if the accounts are accompanied by inexplicable “signs” such as spinning suns or gushing springs—her wonder grows.
Michael O’Neill is the Virgin Mary’s big data numbers cruncher. On Miraclehunter.com, he has codified every known apparition of Mary back to A.D. 40. Mary is everywhere: Marigolds are named for her. Hail Mary passes save football games. The image in Mexico of Our Lady of Guadalupe is one of the most reproduced female likenesses ever. Mary draws millions each year to shrines such as Fátima, in Portugal, and Knock, in Ireland, sustaining religious tourism estimated to be worth billions of dollars a year and providing thousands of jobs. She inspired the creation of many great works of art and architecture (Michelangelo’s “Pietà,” Notre Dame Cathedral), as well as poetry, liturgy, and music (Monteverdi’s Vespers for the Blessed Virgin). And she is the spiritual confidante of billions of people, no matter how isolated or forgotten.
Muslims as well as Christians consider her to be holy above all women, and her name “Maryam” appears more often in the Koran than “Mary” does in the Bible. In the New Testament Mary speaks only four times, beginning with the Annunciation, when, according to Luke’s Gospel, the angel Gabriel appears to her and says she will bear “the Son of the Most High.” Mary answers, “Here am I, the servant of the Lord.” Her only extended speech, also in Luke, is the lyrical Magnificat, uttered in early pregnancy: “My soul magnifies the Lord, and my spirit rejoices in God my Savior, for he has looked with favor on the lowliness of his servant. Surely, from now on all generations will call me blessed.” Indeed they have... 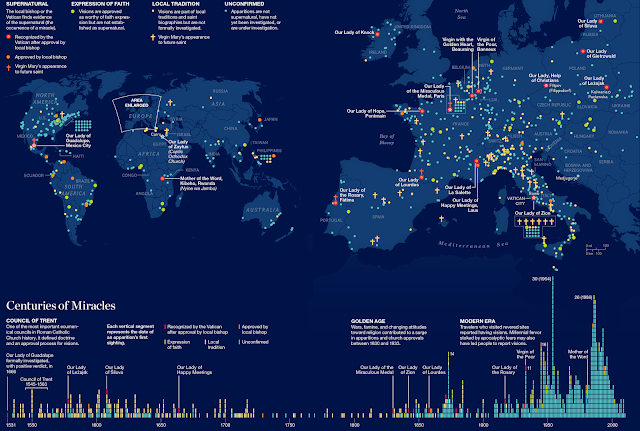 ”Woman behold your son, (son) behold your Mother.” (As humanity has an eternal Father, Jesus, dying on the cross, shares and gave the world an eternal Mother.

True. If we believe we (the Church) are the Bride of Christ, then at the very least, Mary is our Mother-in-Law.

Mary speaks seven times in the Gospels, not four.

Mary's last spoken words in the Bible are: "Do whatever He tells you."

Unfortunately the place of the oldest apparition in Western Europe -1061 in England - Walsingham is for some unknown reason, not on the map?