#PopeFrancis “Christian life is a journey, it is a joyful journey: sing, then, for this.” Text- Video 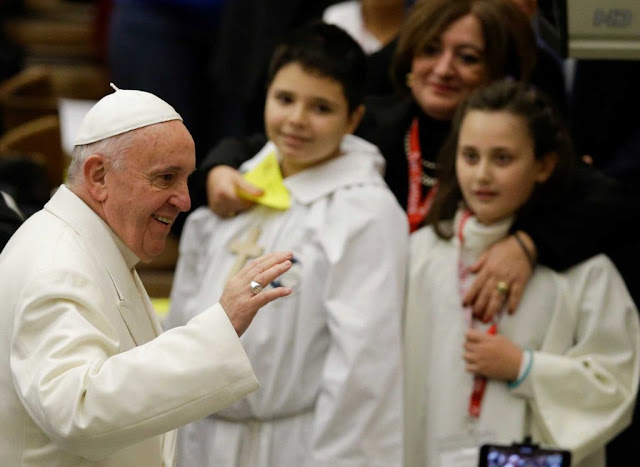 (Vatican Radio) Pope Francis received the Pueri cantores on Thursday morning in the Paul VI Hall in the Vatican. The international young choristers’ organization has been holding its annual meeting in Rome this week, six days of festivities, culminating on New Year’s Day with some of them participating in Mass in St. Peter’s Basilica.
The motto of the Congress this year is Cantate spem vestram! “Sing out your hope!” – a theme on which Pope Francis reflected extensively in unscripted remarks to the choristers on Thursday morning. “Christian life is a journey,” said Pope Francis, “it is a joyful journey: sing, then, for this.” The Holy Father offered his remarks in response to a series of questions from a select few of the more than 4 thousand participants, questions that ranged from whether Pope Francis ever gets angry, to what he wanted to be when he grew up. “When I was a boy,” said Pope Francis in answer to the second question, “I thought about becoming a butcher,” explaining that he always enjoyed to see the butchers about their trade in their market stalls in the Buenos Aires of his childhood.
In answer to the first, he said, “Yes, but I don’t bite,” and warned against letting what is a normal and inevitable human reaction to injustice or even irksome behavior in others, not become a habit. “Anger is poison,” he said, “it poisons your soul,” if too long or too often indulged. The third of Pope Francis’ young interlocutors asked him also whether the world will always be as we see it on the nightly news, which often seems full of nothing but bad, sad and even tragic stories. “This struggle between the devil and God,” answered Pope Francis, “will continue until the end of days.”
He went on to say, “We all have inside each of us a battlefield – inside each of us there is a struggle between good and evil: we have graces and temptations, and we need to talk with the parish priest and with our catechists about these things, in order to understand them well.” Still, there are many bright spots. “There are many good things in the world,” he said, “and I wonder: why aren’t these good things publicized?” When we watch television, then, “think of the many, many people – so many holy people – who give their whole lives in order to help others,” in deed and in prayer – laity, priests and religious alike. After a brief choral interlude, Pope Francis offered his blessing and best wishes for the New Year, and said, “We’ll see you tomorrow in St. Peter’s Basilica – it will be a pleasure.” (Image Share Google Images)