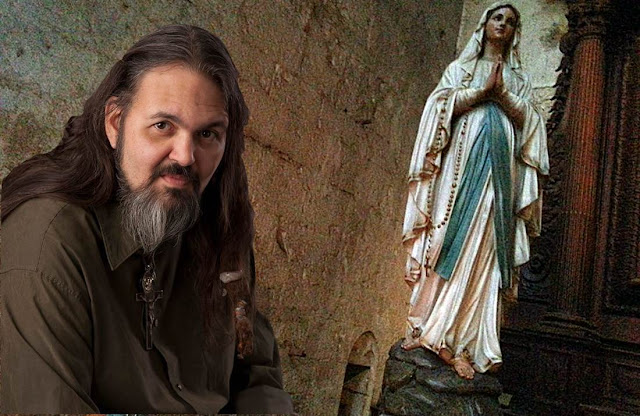 Zachary King, a former satanist, travels around the world telling people the good news about God's mercy. He shares his conversion story. At one time he was a high wizard of a satanic coven and has now become a devout Catholic.Zachary King recently gave a talk at the National Shrine of The Divine Mercy in Stockbridge, Massachusetts. He told how the Blessed Mother saved him from a 26-year darkness.  As a 12-year-old, King joined a satanic coven and got involved in child pornography. He said he was tricked into it because when he was 11, he was a victim of sexual assault. So, when he joined the coven, the adults who ran it convinced King to participate in child pornography using the logic of empowerment — reasoning that now it was his decision to participate in these acts and it was within his control. "I did this for four years, not realizing at the time that I was being re-victimized each time." King describes the atmosphere of this coven as a sort of youth center. Kids were encouraged to stop by after school if they needed a place to hang out. They could eat there. There was a pool there. The people who ran the coven also went to his church. In fact, he said, 11 of the 12 deacons at his church were members of the coven. He said he would get dropped off at the house on Friday nights by his parents, and the members of the coven would bring him home on Sunday or bring him to church. A member of the coven for 26 years, King said he ascended to the role of "high wizard." He said that during that time, he had not only been involved in pornography, he also assisted in 146 abortions and he helped split up 112 churches. Because he was so high up in the organization, there were a lot of people under him who were also committing serious atrocities, King said. He left the coven when he was 33, married his wife, Katie, moved to Vermont, and managed a jewelry store at a mall. In 2008, a woman by the name of Mary Ann, came into the store to purchase some earrings. She then gave him a small, golden disc, which he realized later was a Miraculous Medal — and she told him, "The Blessed Mother is calling you into her army." Then she told him that the object he was holding was very powerful, so he closed his fist around the object and, as he described, "suddenly, the world around me faded away." He remembers Mary Ann telling him about his past years of satanism and the occult, the magic, the abortions, and the sin. "Then the Blessed Mother appeared and took me by the hand and turned me around, and Jesus was standing behind me. This was what I was looking for," King said. When the Blessed Mother took him by the hand, the Jesus that I saw was Divine Mercy Jesus, he added, referring to the depiction of Jesus in the Divine Mercy Image, which the Lord instructed St. Faustina to have painted in 1931. "I didn't know what the rays meant, but the rays were all around me, going through me." King knew immediately that this was Jesus and that everything that he had done previously was wrong. He soon joined the Church that Mary Ann belonged to and became a Catholic. He became familiar with Divine Mercy, and when he saw the Divine Mercy Image for the first time, he realized that was the image that he had seen when Mary Ann gave him the Miraculous Medal and when the Blessed Mother took him by the hand. He believes that the Lord gave him this image because He wanted him to know that he could be forgiven. "Divine Mercy was my salvation," King said. There are so many people who don't believe that they are worthy of salvation because of their sins, King said. But, he explained, in the story of the Prodigal Son, the Father is merciful. And the story about the workers in the field who go out to labor at different hours of the day, they are all paid the same wage, he added. King said when he met the Blessed Mother in that jewelry store, she told him that his job now was to work to end abortion. He tours the country speaking out against abortion, and he and Katie counsel thousands of people who have been caught up in the occult and who have spiritual warfare issues through their All Saints Ministry. (Text edited from Divine Mercy Site of Stockbridge)

TammyMaria Barrone said…
Glory And Praise to You, O Lord God Almighty, now and forever! Praising God gives extra favors. I praise and thank God for giving you, Zachary, the Grace to know Him and His Holy Mother...now get to know Holy St. Joseph! Thankyou for all the good Work you and Katie are doing in His Vineyard! Glory unto You. O Lord!
July 12, 2017 at 10:08 AM

TammyMaria Barrone said…
It's me again! Forgot to tell you that Jesus revealed to Sr. Josepha Menendez that HE CONSIDERS ANYONE WHO'S BEEN MOLESTED INNOCENT. Now, that's Divine Mercy! Blessed Hope on the rising morn! -Tammy.
July 12, 2017 at 10:23 AM

Arkanabar T'verrick Ilarsadin said…
I've opined before, elsewhere, that it's surely possible that NONE of us "deserve" salvation. But whether we deserve it is the wrong question.