#PopeFrancis " True prayer is born of a heart which repents of its faults..." #Audience FULL TEXT - Video 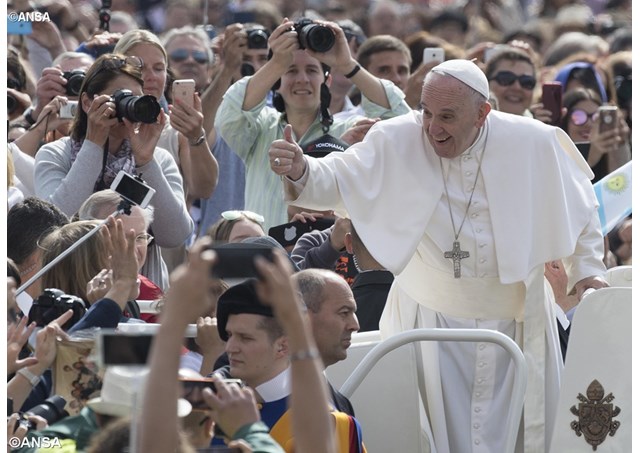 (Vatican Radio) Tens of thousands of pilgrims crowded St Peter’s Square Wednesday for Pope Francis’ weekly General Audience.  Pope Francis continued his catechesis for the Jubilee Year of Mercy and said “true prayer is born of a heart which repents of its faults and failings, yet pleads for the grace to live the great commandment of love of God and neighbor.”

Pope Francis was referring to the parable of the Pharisee and the Tax Collector in which  Jesus contrasts the arrogance and self-righteousness of the Pharisee’s prayer with the tax collector’s humble recognition of his sinfulness and need for the Lord’s mercy.
In his prayer, the Pharisee “showed off” his own merits and displayed “ a sense of superiority towards other men,” the Pope said.  He prayed to God but in truth, he was really interested in himself. Rather than “prostrate himself before the grandeur of God,” he remains standing; he feels sure of himself, almost as if he were lord of the temple.”
The Pharisee despised people commonly seen as “impure,” sinners such as the tax collector, the Pope asserted, but God “loves all men and does not despise sinners.”
“It is not enough then, to ask ourselves how much we pray; we must also ask ourselves how we pray,”  he added, saying it’s important to examine our hearts and “eradicate arrogance and hypocrisy.”
It is also important “to find the way back to our hearts” and to “rediscover the value of intimacy and silence”  amid the frenetic pace of daily life because “it is there that God meets us and speaks to us.”  The Pharisee makes his way confidently towards the temple, said the Pope, but he is unaware of “having lost the way towards his heart.”
The tax collector, on the other hand, comes to the temple “humble and repentant” and was even afraid to raise his eyes to heaven, noted the Pope. His was a “beautiful prayer,” the Pope said, inviting the faithful to recite it with him three times: ‘Lord, have pity on me for I am a sinner.”
The parable, he stressed, shows us that being righteous  or sinners is not a question of social standing but of how we act towards God and others. Humbly recognizing his sin, the tax collector begs for God’s mercy – and shows all of us, the Pope said, the necessary condition to receive God’s forgiveness.  It is he, the “despised” one, who becomes the “icon of the true believer” whereas the Pharisee is “corrupt and a hypocrite.”
Arrogance, the Pope concluded, “compromises every good action” and empties prayer of meaning.  Arrogance will keep our prayers from reaching God, but the humility of the poor in heart will throw open the doors to His mercy.

Below, please find the text of the Holy Father’s remarks to English speaking pilgrims:
Dear Brothers and Sisters:  In our continuing catechesis for this Holy Year of Mercy, we now turn to the parable of the Pharisee and the Tax Collector (Lk18:9-14).  Jesus contrasts the arrogance and self-righteousness of the Pharisee’s prayer with the tax collector’s humble recognition of his sinfulness and need for the Lord’s mercy.  True prayer is born of a heart which repents of its faults and failings, yet pleads for the grace to live the great commandment of love of God and neighbour.  Indeed, the proud disdain of the Pharisee for the sinner at his side prevents him from being righteous in God’s sight.  To pray well, then, we need to look into our own hearts and there, in humble silence, let the Lord speak to us.  The honesty and humility which God asks of us is the necessary condition for our receiving his mercy.  The Blessed Virgin Mary is the model of such prayer.  In her Magnificat, she tells us that God looks with favour on the humility of his servants, and hears their plea.  May she, our Mother, help us to pray as we ought.
I greet the English-speaking pilgrims and visitors taking part in today’s Audience, particularly those from England, Ireland, Scotland, Norway, Sweden, Vietnam, China, Indonesia, the Philippines, Nigeria, Canada and the United States of America.  With prayerful good wishes that the present Jubilee of Mercy will be a moment of grace and spiritual renewal for you and your families, I invoke upon all of you joy and peace in our Lord Jesus Christ.