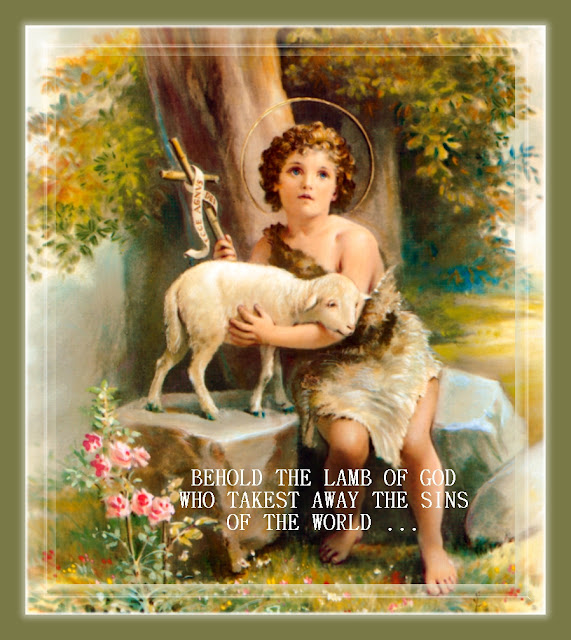 Solemnity of the Nativity of Saint John the Baptist - Mass during the DayLectionary: 587

Hear me, O coastlands,
listen, O distant peoples.
The LORD called me from birth,
from my mother’s womb he gave me my name.
He made of me a sharp-edged sword
and concealed me in the shadow of his arm.
He made me a polished arrow,
in his quiver he hid me.
You are my servant, he said to me,
Israel, through whom I show my glory.
Though I thought I had toiled in vain,
and for nothing, uselessly, spent my strength,
yet my reward is with the LORD,
my recompense is with my God.
For now the LORD has spoken
who formed me as his servant from the womb,
that Jacob may be brought back to him
and Israel gathered to him;
and I am made glorious in the sight of the LORD,
and my God is now my strength!
It is too little, he says, for you to be my servant,
to raise up the tribes of Jacob,
and restore the survivors of Israel;
I will make you a light to the nations,
that my salvation may reach to the ends of the earth.

In those days, Paul said:
“God raised up David as king;
of him God testified,
I have found David, son of Jesse, a man after my own heart;
he will carry out my every wish.
From this man’s descendants God, according to his promise,
has brought to Israel a savior, Jesus.
John heralded his coming by proclaiming a baptism of repentance
to all the people of Israel;
and as John was completing his course, he would say,
‘What do you suppose that I am? I am not he.
Behold, one is coming after me;
I am not worthy to unfasten the sandals of his feet.’
“My brothers, sons of the family of Abraham,
and those others among you who are God-fearing,
to us this word of salvation has been sent.”

When the time arrived for Elizabeth to have her child
she gave birth to a son.
Her neighbors and relatives heard
that the Lord had shown his great mercy toward her,
and they rejoiced with her.
When they came on the eighth day to circumcise the child,
they were going to call him Zechariah after his father,
but his mother said in reply,
“No. He will be called John.”
But they answered her,
“There is no one among your relatives who has this name.”
So they made signs, asking his father what he wished him to be called.
He asked for a tablet and wrote, “John is his name,”
and all were amazed.
Immediately his mouth was opened, his tongue freed,
and he spoke blessing God.
Then fear came upon all their neighbors,
and all these matters were discussed
throughout the hill country of Judea.
All who heard these things took them to heart, saying,
“What, then, will this child be?”
For surely the hand of the Lord was with him.
The child grew and became strong in spirit,
and he was in the desert until the day
of his manifestation to Israel.
Posted by Jesus Caritas Est at 10:50 AM